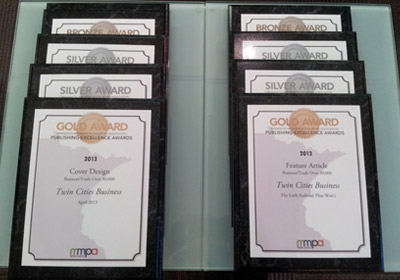 During a Thursday evening gala at the Nicollet Island Pavilion, Twin Cities Business received awards for design and editorial excellence, for both its monthly print magazine and its twice-weekly e-newsletter, Briefcase.

TCB’s April 2013 issue proved to be a big hit among judges. It won a gold award for best cover design in the category for business and trade publications with a circulation of more than 30,000. The cover, shown below, depicts a freight train and a light-rail vehicle on a collision course—referring to a showdown over plans for the Southwest Corridor light-rail line.

It was the April cover story that also won a gold award for “Best Feature” (business/trade over 30,000). Written by Executive Editor Adam Platt, the piece explored the light-rail dispute, which has now garnered ink on the front page of daily newspapers but was first examined by TCB. Read the award-winning story, titled “The Little Railroad That Won't,” here.

Meanwhile, TCB’s e-newsletter, Briefcase, won silver in the “E-newsletter” (business/trade over 30,000) category. The newsletter, which is delivered to subscribers’ inboxes on Tuesday and Thursday afternoons, features the latest local business news, as well as insight, analysis, and perspective that can’t be found elsewhere. Subscribe to Briefcase—for free—here.

• Single Page or Spread Design (Business/Trade Over 30,000): “A Date with Density,” about population density in the Twin Cities

• Feature Design (Business/Trade Over 30,000): “Sweet Land,” exploring Minnesota’s rich history in the confections business and the next generation of candy makers

• Profile Article (Business/Trade Over 30,000): “The Business Behind Bizarre,” detailing how Andrew Zimmern is morphing a hit cable TV show into a diversified, branded network of businesses

• Single Page or Spread Design (Business/Trade Over 30,000): “Out with a Bang,” examining the ways in which the funeral business is providing new ways to say goodbye

Last year, TCB won more than a dozen MMPA awards, including the premier “Magazine of the Year” distinction.

Subscribe to the print edition of Twin Cities Business here.