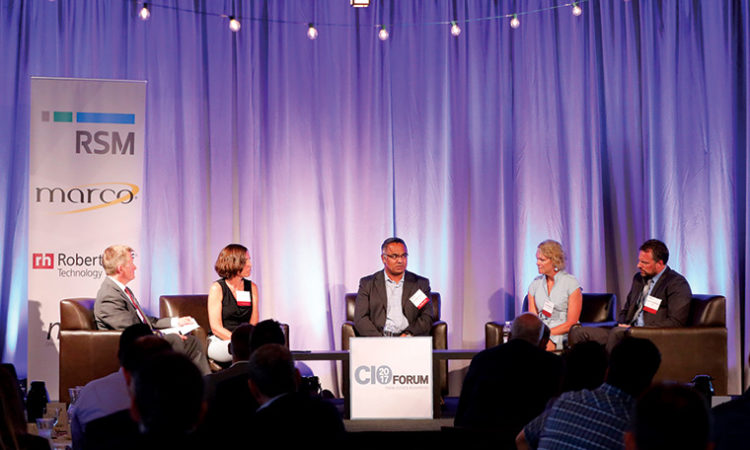 At TCB’s CIO Forum, industry leaders highlight tech innovations and how they are building a talent base.
By Kate LeRette
September 01, 2017

Chief information and technology officers are leading their organizations through perhaps the most tumultuous and critically important challenges addressing how and where information is generated, shared, stored, secured and accessed. As technology continues to advance, these leaders are focused on being more strategic, proactive and innovative to keep their companies’ IT infrastructure up-to-date, and in many cases, ahead of the curve.

To learn how chief information and chief technology officers are tackling these challenges, Twin Cities Business hosted its annual CIO Forum on July 12 at the Nicollet Island Pavilion in Minneapolis. The forum was moderated by editor-in-chief Dale Kurschner and sponsored by RSM, Marco, Robert Half Technology and Minnesota High Technology Association.

Staying ahead of the competition is no easy feat, and when most of your time is spent covering the basics—maintaining existing software, servers and networks—it leaves little time for innovation. That’s one of the greatest challenges CIOs and CTOs are facing today.

“About 85 percent of our time is spent running the business—keeping the lights on,” Werder says. “But we have taken considerable action this year by doing some outsourcing to free up [our team’s] time so they can focus more on transformative work.” One action HCMC took was moving its data center.

Outsourcing also has been helpful for FindLaw. Its strategy to outsource some of its support-related functions has not only provided Schlosser’s team with more time to focus on other tasks, but “it’s been a way for us to look at the roles and responsibilities that our technology team has and try to put them in the right cost-model for what we are trying to do,” she says.

In terms of innovation, Schlosser hopes to get her team’s creative juices flowing through innovation labs recently developed by Thomson Reuters. Though still new, she sees the labs as a way for her team to test emerging technologies. “Many of the innovation labs have an expertise around data analytics, data science and cognitive computing,” she says.

Parhar’s focus is similar to Schlosser’s. He’s developing a business incubator, which will allow for “high-profile and high-potential talent to come in, show the business what to do and then move on.” Additionally, Parhar says the company is looking to acquire a number of businesses, which he says will be a natural opportunity for new talent and new ideas.

Attracting top tech talent is key for companies to remain competitive, but the search is becoming increasingly difficult. “The roles have reversed,” Werder says. “We have to actually sell to employees and potential employees. There is a constant recruiting effort.”

One way FindLaw is recruiting new talent is through a student consulting company called Maverick. The program gives students an opportunity to gain first-hand business experience while they are in school by working part time for a company. “It’s also a way for us to test them out,” Schlosser says. “More often than not, we hire students who worked for us.”

Retention, however, is just as crucial as attracting talent. “One of the critical pieces of retention is creating a culture where people feel that they are part of the business, not a provider of services to the business,” Parhar says.

To keep their employees engaged and in the know, FindLaw has created a program called Tech Tracks. Experts in the organization get together for a day to talk about where big growth areas exist and what’s happening in those areas. “It’s a way to show [employees] where the path is and where we are going,” Schlosser says.

At Jack Link’s, “we connect [our team’s] work to the strategies that are important to the organization,” Hartman says. “That not only engages people in the work, but really helps people feel that they are valued.”

Despite the many challenges CIOs and CTOs are facing, there are plenty of opportunities. For example, FindLaw recently created an internal kiosk where employees can immerse themselves in various customer service experiences. Through the kiosks, the company has identified where improvements need to be made, while also helping employees understand what the customer experience is.

A big opportunity for Jack Link’s is its new office space and technology center in Mayo Square, which the company hopes will help broaden its profile and attract new customers. “It’s our first time having an urban technology facility, and it will be the first time making jerky in downtown Minneapolis,” Hartman says.

While technology plays a large role in a CIO’s responsibilities, it’s still a people business, Hartman says. “Every element of technology that we deploy, that we support, that we touch, affects somebody somewhere.”