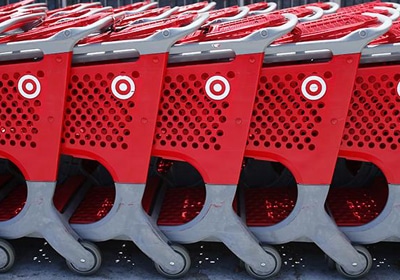 The company set its sights on digital retailer Amazon after its fourth quarter profits sank by nearly 43 percent year-over-year.
February 28, 2017

Target Corp. announced a $7 billion plan on Tuesday to “reimagine” its retail stores to better compete with rivals like Walmart and Amazon, as the beleaguered retailer reported bleak financial results during the important holiday season.

The Minneapolis-based company said it would spend the next three years re-formatting the backrooms of about one-third of its locations to not just hold products, but also operate as “hyperlocal distribution centers,” Target said. By 2019, the company expects all 1,800 of its locations will have the functionality to quickly ship orders to a customer’s house, similar to Amazon’s Prime Now service.

“We’re investing in our business with a long-term view of years and decades, not months and quarters,” Target CEO Brian Cornell said in a statement. “We’re putting digital first and evolving our stores, digital channels and supply chain to work together as a smart network.”

Part of the plan will also include further investment in its small format locations—formerly known as Target Express—which are geared toward college campuses and urban areas. Target anticipates opening 30 new small format stores this year, doubling its current presence, with the ultimate goal of having 130 stores in operation by 2019.

Beyond increased promotional efforts, Target will look to add a splash of excitement to its shelves with the launch of more than a dozen new brands. Following the success of its Cat & Jack kids brand from this year, as well as others like Pillowfort, Target’s new brands will feature products ranging from apparel to around-the-house essentials. Introduction of the new brands will start this year and continue into 2018.

The retailer’s reinvestment plan arrived on the same day as its fourth quarter results, which fell below Wall Street’s expectations.

Profits fell nearly 43 percent to $817 million during the critical holiday period, compared to $1.4 billion a year ago. Last January, the Minneapolis-based retailer lowered its outlook and warned investors of “disappointing” traffic and sales at its retail stores.

Analysts polled by Zacks Investment Research estimated earnings per share of $1.50, a nickel more than the actual result. The company’s $20.69 billion in sales for the three-month period ending January 28 also fell below the mark. Analyst had predicted $20.75 billion.

Its digital sales increased by 34 percent year-over-year, amounting to 1.8 percentage points of comparable sales growth. However, Target’s same-store sales, a key retail metric that evaluates gains or losses in revenue at existing operations, decreased 1.5 percent for the quarter.

In response, Target shares plunged 13 percent before the opening bell.

For the new fiscal year, Target expects a low-single-digit decline in same store sales, amounting to adjusted earnings of $3.80 to $4.20 per share for the year. Analysts had predicted $5.32 a share.

The company’s first quarter guidance was no different when it came to missing Wall Street’s estimate, as Target projected earnings per share of 80 cents to $1 compared to an expected $1.33 a share.