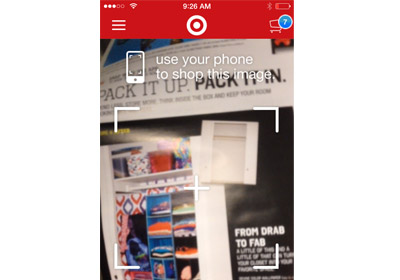 “In a Snap” allows users to find out more about products they see in select Target ads by taking pictures with their phone.
July 31, 2014

Target Corporation is again expanding its digital offerings with a new image recognition mobile application called “In a Snap.”

The Minneapolis-based retail giant said Monday that the app allows users to photograph select ads with their phones to find out more information about the products featured in the ad, including where to buy them.

The app is currently available in the iTunes app store and is compatible with the iPhone, iPad, and iPod. It appears to be an attempt to introduce a more user-friendly technology to replace so-called “QR codes.”

“The new image recognition app lets you easily shop Target items directly off the pages of magazines and printed ads—without having to scan confusing codes, look up links, or search for product online or in store,” Target said in a statement.

The company said the app is currently compatible with ads it has placed in Real Simple, Architectural Digest, Domino, its in-house back-to-college catalog, and its store signage at its new Target Express store—which opens later this week in Minneapolis.

According to Target, the app is currently in a “test-and-learn” stage and may be expanded into more ad campaigns in the future depending on guest feedback and initial tests.

Throughout last year and 2014, Target has taken steps to increase its emphasis on digital channels. In April, it significantly expanded its online subscription service so the program would apply to more than 1,500 products rather than just 200.

In September, it launched its own video streaming service, called Target Ticket, that offers about 30,000 movie and television titles to buy, rent, download, or stream.

Some of its other digital expansions include the acquisition of beauty products e-retailer DermStore Beauty Group, as well as e-commerce sites ChefsCatalog.com and Cooking.com. Target also expanded its digital operations out west in May, opening an office in San Francisco to focus on finding and fostering partnerships for technological innovation.

In October, the company said its shift to more digital offerings changed its business model to the point that it needed to cut jobs that it saw as “duplications,” which resulted in the loss of 150 employees from its corporate staff in the Twin Cities.

However, at the end of last year the company said its digital efforts have been paying off, as online traffic grew at “double-digit rates” during the holidays and mobile sales climbed 100 percent year-over-year. (The company does not, however, break out digital sales, which appear to constitute a small portion of overall revenue.)