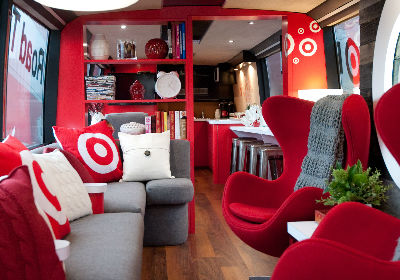 A Target-themed caravan will make stops in close to two-dozen cities across the country within the first two weeks of December; at each stop, Target will offer events that are open to the public.
December 07, 2012

Target Corporation’s first Canada stores aren’t slated to open until March, but the retailer has already launched a cross-country marketing initiative to gear up for its debut.

Minneapolis-based Target on Tuesday announced plans to launch a road tour across Canada. A Target-themed caravan will make stops in close to two-dozen cities across the country, and the stops coincide with various events that are open to the public. They include performances by Canadian artists, musicians, children’s performers, and comedians.

The “Target Holiday Road Trip” kicks off in Nova Scotia on Friday and will conclude in British Columbia in mid-December.

The Nova Scotia event features holiday stories read by Canadian actor Gordon Pinsent, comedian and actor Shaun Majumder, and performance group Razmatazz for Kids; holiday treats; and a “craft and play zone.” Visitors can also have their photos taken with Target’s mascot, Bullseye the dog, to create their own photo flip-books.

“We are excited to be celebrating the holidays with Canadians from coast to coast,” Livia Zufferli, director of marketing for Target Canada, said in a statement. “We’ve planned surprises in more than 20 communities across the country in the hopes of creating unforgettable memories and giving Canadians a taste of what they can expect when Target opens in 2013.”

Adrian Capobianco, president of Toronto marketing agency Quizative, Inc., told Canada's Financial Post that Target’s road trip is helping to further the retailer’s “we love Canada” message. To further illustrate the message, Capobianco pointed to the red-and-white Canadian banners and billboards that are popping up across the country and that feature Target’s distinctive bullseye logo, a heart, and a maple leaf.

“They are trying to put themselves on the ground with Canadians in an entertaining way instead of straight advertising, and to associate themselves with Canadiana rather than seeming like the big American corporation rolling in,” Capobianco told the Financial Post. “When brands do that, the intent is that the experience will carry beyond just the people who are impacted there on the ground. The end game is about public relations and media coverage.”

Target is Minnesota’s second-largest public company based on revenue, which totaled $68.5 billion in its fiscal year that ended in January. It operates 1,782 stores across the United States and plans to open 124 stores across Canada beginning in March.

In July, Target unveiled the locations of its initial store openings in Canada. The first 24 stores will open in Ontario this spring. To view a complete list of locations and the time frame in which they will open, click here.