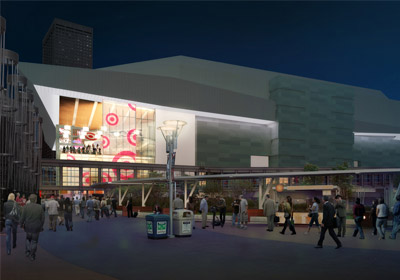 The budget of the Target Center renovation in downtown Minneapolis keeps bouncing like a basketball.

When city of Minneapolis and Minnesota Timberwolves officials first began touting arena renovations in February 2011, the price tag was $155 million. In the spring of 2012, the number being kicked around was $135 million. In November 2013, the Minneapolis City Council approved a pared down $97 million renovation agreement for the city-owned arena.

But under the revised project budget up for discussion at Minneapolis City Hall this week, renovation costs have climbed $31.9 million since late 2013. The revised budget, outlined in a city staff report, is now $128.9 million.

The city’s staff report characterizes the original term sheet at yet another number: $98.9 million. Ted Johnson, senior vice president and chief marketing officer for the Minnesota Timberwolves, says that the original term sheet called for increasing the budget — which he says was $96.9 million, rounded to $97 million – by $2 million if the team decided to vacate its office space.

The team announced its move across the street to Block E – now Mayo Clinic Square – in November 2013, but did not call attention to the slight increase this meant for the Target Center renovation budget.

How could the city’s estimate be so far off the mark?

“That’s what happens when you actually get into the details,” says Minneapolis City Council Member John Quincy, who points to increased costs for construction, labor and materials as key factors.

The city’s staff report refers to construction cost increases as “dramatic” and indicates that required project components such as enhancements related to the Americans With Disabilities Act (ADA) “will be more costly than anticipated.”

Under the revised proposal, the city of Minneapolis will kick in $74 million, or 57.4 percent of the project costs. Originally, the city was set to pay half of the renovation costs. Under the revised plan, the Minnesota Timberwolves and Lynx will contribute $49 million and arena manager AEG is down for $5.9 million, both increases as well.

Johnson says that intensive number crunching and “value engineering” of the project brought everyone to the conclusion that the budget had to increase. The new number is not far from the estimate that was being floated three years ago.

“To do the project right. …we’d need to add resources,” says Johnson. “We’re kind of back to where we had been in that spring of 2012.”

The proposed increases are up for discussion on Tuesday afternoon before the city council’s Community Development and Regulatory Services committee. It will also be discussed by the Ways & Means committee, which Quincy chairs, on Monday. City staff is recommending approval of the revised agreement, which ultimately must be approved by the full Minneapolis City Council.

Despite the cost increases, the revised plan appears to have general support from the members of the Minneapolis City Council.

“I haven’t seen any negative responses yet as we’re starting to do our internal briefing,” Quincy said.

Target Center, which opened in October 1990, originally cost $104 million to build.
The city acquired it in March 1995 for approximately $80 million when the team’s original owners, who also owned the arena, ran into financial trouble. The revised plan still uses the same source of money to pay for the arena renovations: money from the city’s entertainment tax, which is also used to pay off bonds on the Minneapolis Convention Center.

The revised deal also adds other provisions, including an agreement for the team’s lease to run until 2035 – three years longer than under the previous agreement.

“We wanted additional time for the city’s portion to be amortized so we can spread that payment out a little bit further,” says Quincy.

The staff report also proposes “raising the dollar threshold for when a sale of the Timberwolves triggers the provisions for reimbursement of city investment in the renovation project from $450 [million] to $625 [million].”

Quincy says that change was driven by a recent estimate by Forbes magazine which valued the team at $625 million, ranking 29th out of the 30 teams in the NBA. Quincy adds: “I don’t know if the team has any interest in selling.”

Phil Krinkie, formerly a Republican member of the Minnesota House and president of the Taxpayers League of Minnesota, has been a frequent critic of public money going to sports stadiums.

“It’s like a Shakespearean tragedy: one facility after another after another where the taxpayers wind up subsidizing these facilities at an unbelievable cost,” says Krinkie.  “The cycle will continue. It’s a never-ending process.”

The city’s staff report indicates that the bulk of the renovation work on Target Center will be done during the summer of 2016, with the final elements being completed in early 2017.