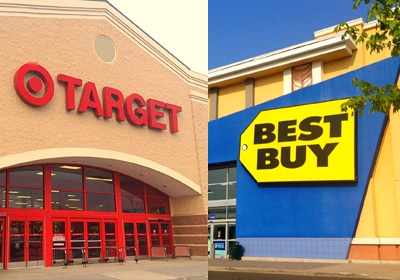 Best Buy looks to edge out Target by opening its doors one hour earlier on Black Friday, whereas Target is focusing on deals and running multiple promotions throughout the month.
November 20, 2016

In anticipation of the crucial holiday shopping season, Minnesota-based retailers Target and Best Buy announced the store hours and special deals that will be featured at each company’s locations on Black Friday.

Richfield-based Best Buy said it plans to lock its doors at 1 a.m., opting to reopen at 8 a.m. on Black Friday and stay open until 10 p.m.

Target’s approach will be slightly different. The company’s more than 1,800 stores will remain open throughout the night and into Black Friday evening, closing at 10 p.m., 11 p.m. or midnight depending on the location.

Both companies are offering an array of deals on electronics, appliances and other items. Best Buy’s full list of discounts can be found here. Target’s Black Friday ad can be viewed here.

Major retail competitor Wal-Mart said on Wednesday it would follow a similar outline to that of Target on Black Friday. Its stores will open at 6 p.m. on Thanksgiving — the same time as Target — which will give in-store shoppers early access to Black Friday deals.

The differentiator between the two retailers will be the timing of each one’s online deals. Wal-Mart’s online deals will launch at midnight, well after its stores open, whereas Target will offer a “Black Friday Presale” online and in stores via Cartwheel, the company’s mobile saving app, on Wednesday, the day before Thanksgiving.