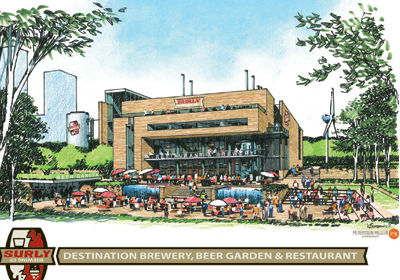 Surly Gets $1.5M in Cleanup Grants for Mpls. Brewery Site

The Metropolitan Council awarded a $545,300 grant for environmental cleanup at a Minneapolis site that the craft brewer is exploring—and the Minnesota Department of Employment and Economic Development has approved another $1 million in cleanup funding.
January 20, 2013

Surly Brewing Company is one step closer to fulfilling its mission to build a $20 million “destination brewery.”

Both the Metropolitan Council and the Minnesota Department of Employment and Economic Development (DEED) recently awarded grants that together total $1.5 million for environmental cleanup at a Minneapolis site near Highway 280 and University Avenue that Surly has been exploring.

Brooklyn Center-based Surly, a craft brewer, said in September that the site had “risen to the top” of its list but wasn’t a sure thing. The company added that it was seeking grants from the Met Council, the State of Minnesota, and Hennepin County to cover some of the cost of the site’s preparation and cleanup.

The Metropolitan Council said Wednesday that it has awarded a $545,300 grant to Surly to assist with environmental cleanup at the 8.3-acre now-vacant site. It’s located in Prospect Park and once housed a Northern Star Company potato processing plant.

Then on Thursday, DEED announced that it awarded $1 million to the City of Minneapolis in cleanup funding for the “Northern Star redevelopment site.” Although DEED didn’t specifically name Surly, it said a planned redevelopment would include “50,000 square feet of commercial space for a brewery and a restaurant.”

DEED added that the new development would create 67 jobs, retain 15 jobs, increase Minneapolis’ tax base by $193,064, and leverage $19 million in private investment.

Although the DEED grant was one of the two largest among 14 that the agency announced Thursday, the dollar amount was less than what Surly had hoped for. A DEED spokesman told Twin Cities Business on Thursday that $1.5 million was requested on November 1.

Another $450,000 that Surly requested from Hennepin County hasn’t yet been approved, but initial indications are that it will receive a green light. A Hennepin County spokeswoman said Thursday that county staff recommended that the grant be approved. The request is one of 10 Environmental Response Fund grants that a county committee will vote on Tuesday, and the Hennepin County Board will make a final decision on January 29.

In June, Surly narrowed its list of possible locations for the destination brewery to four—two in Minneapolis, one in Brooklyn Center, and another in an unnamed “inner-suburban” location. Then in July, Surly selected Minneapolis-based HGA Architects and Engineers to design the brewery.

The Surly project was one of 14 to recently receive a “Livable Communities” grant from the Met Council. The agency approved nearly $2.4 million in such grants, which are meant to help local governments create jobs and promote economic development. The Met Council awards about $5 million annually for brownfield cleanup and allocates cleanup funds twice a year.

Meanwhile, the $1 million Surly grant from DEED was one of 14 totaling $5.3 million that the state agency distributed under its Contamination Cleanup Grant Program.