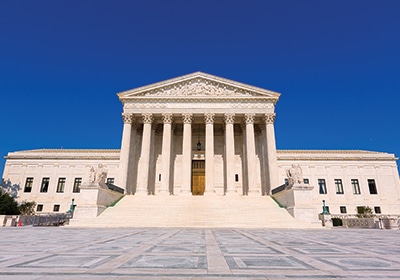 Supreme Because It Is Final

This is an interesting question, but it is the wrong one. The Constitution contains no time limit on the president regarding the appointment of a federal judge. Presidents have, over the years, appointed Supreme Court justices within a year of a presidential election; most recently, Justice Anthony Kennedy was appointed by President Reagan in the final year of his term. So while it is true that there is no requirement as to when a president can nominate a U.S. Supreme Court justice, it is equally true that there is no requirement for the U.S. Senate to complete its process of “advice and consent.” So the real question is not whether the president has the power to appoint; he does. Nor is the real question whether or not the Senate can be forced to “advise and consent” in a particular period; it cannot. The real question here is whether or not politics is driving the shout for delay.

On that question, there is little doubt. When the Senate majority has been of a party different from the president, it is not uncommon for various senators to hope to delay the appointment of a justice until after an impending presidential election. Joe Biden had this position prior to the 1992 election, just as you have this concern prior to the 2016 presidential election. It is not hard to find other examples of this partisan affection for delay.

So politics drives this position, and politics is bad for the United States Supreme Court. Former Sen. David Durenberger recently wrote in the local newspaper that delaying this nomination would inevitably ensnarl the selection process in a matter of partisan politics. Various candidates for federal office would no doubt campaign on the qualities of the pending nominee. The very hearing process would become a televised spectacle seen through an electoral lens, as were the Clarence Thomas hearings in 1991. The committee could also explore other questions.

Nobody seems to want to question lifetime tenure for the U.S. Supreme Court. Former Texas Gov. Rick Perry, during one of his short-lived presidential campaigns, suggested that judges be appointed to the Supreme Court for one 18-year term on a staggered basis so that each president would get the same number of appointments. The elephant in the room, if you should pose this question, is the age of our current Supreme Court. Are we best served by a court of people in their 70s, 80s and beyond? Is an orderly succession a better approach to an orderly jurisprudence than a random act of mortality?

In very hushed tones, stories are often circulated by former Supreme Court clerks, retired judges and court observers about various members of the court and the infirmities of age that afflicted their decisional process (current justices excluded). The impact of an isolated judiciary separated both by lifetime tenure and the gulf of age is something that could be fruitfully explored by your committee.

Another area of fruitful inquiry that would better serve our republic would be to explore ways in which the politicization of the Supreme Court can be reduced. While no one can prohibit the “Impeach Earl Warren” bumper-sticker mentality, current members of the U.S. Senate could quit attacking the current court for making political decisions. Constituent press releases and press conferences accusing the current Supreme Court of being liberal, ultra-conservative, too political or unconstitutional tarnish the court’s reputation. One can certainly differ with the reasoning of a particular opinion or justice, but doing so in political terms is a grave mistake in a republic based on the respect for law.

This letter is being sent to you before the White House nominates its candidate for confirmation (by press time, President Obama had nominated federal judge Merrick Garland). A legitimate area of inquiry for your committee might be why all of our judicial nominations have to be “politically correct” and why they all have to come from Harvard. Put another way, why do all these appointments have to go to the elites that live within the Acela corridor (U.S. Court of Appeals for the D.C. Circuit)? Why can’t the highest court in this land have real country lawyers who made a living in private practice trying lawsuits (like Justice Jackson)? Very few of the present members of the Supreme Court have tried a jury trial in private practice. Trial lawyers, and particularly ones in private practice, deal with the Sturm und Drang of our society, which should not be a disqualification.

Chairman Grassley, the answers to these questions, and thoughtful hearings to explore these topics, would be more helpful to our society, to our republic, than playing obvious politics with a confirmation.

The White House could also consider these questions before it plays obvious politics with its nomination. Perhaps you and the president could agree that these are the topics to be addressed.

Sincerely yours,
Vance K. Opperman
Fan of the Supreme Court