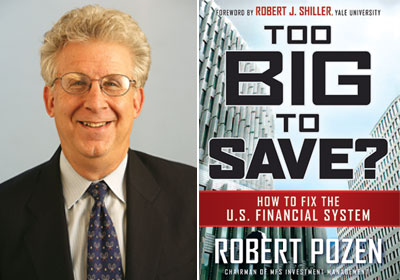 Super Directors to the Rescue?

Robert Pozen and a view of the financial crisis from Medtronic's board.
February 11, 2010

Robert Pozen has been a director for Fridley-based Medtronic since 2004. He’s also a financial expert: a former associate general counsel for the Securities and Exchange Commission, a lecturer at the Harvard Business School, and chairman of MFS Investment Management, a $150 billion Boston-based money manager for individual and institutional investors.

In early December, Pozen spoke to the Twin Cities chapter of the National Association of Corporate Directors about the financial crisis still roiling the country. He drew in part from his recently published book, Too Big To Save? How to Fix The U.S. Financial System. After his speech at the Minneapolis Club, Pozen tackled a few additional questions.

SW: How has the crisis impacted Medtronic’s board meetings?

RP: We’ve become much more focused on what is happening globally. We’re dealing with a global crisis. Second, we’ve started to have much more intensive strategic reviews. There are so many more things going on—the financial crisis, the health care bill, to name just a couple of topics.

SW: In view of the financial crisis, what has been your advice to the CFO or treasurer of Medtronic?

RP: Liquidity is much more important than you thought. Executives were always sensitive to interest rate risk and credit risk. Historically, they underestimated the importance of liquidity—the ability to get your money back.

SW: One of the key recommendations in your book is the idea of “super directors” who will spend a lot more time on their board duties. Has that idea gotten any traction?

RP: You’re seeing this at GM and Citigroup, companies that are starting to get a different kind of director. For instance, Citi now has three or four directors who are former CEOs of banks. They’re much more experienced, much more committed.

SW: Should this idea be extended beyond the largest 200 financial institutions?

RP: I try not to view things as all or nothing. If you’re part of a very large global company that is complicated and growing, then you should spend more time on it. And make sure you have the relevant expertise.

SW: If you had been serving on the board of Lehman Brothers or AIG, what would you have done differently?

RP: Those boards didn’t understand a number of things. One, there was a lot of stuff going on—either off-balance-sheet [activity] or funds they were managing—that really hurt them.

Second, boards are all too often impressed by quantitative risk models. The models are very elaborate and give the illusion that the firm is on top of things. But in fact, normal distribution curves don’t occur that often. Tails—unusual events—are a lot bigger than people think. Therefore, as a director you need to push hard to understand the assumptions and the time frames and the limitations of these models.

RP: No, and it shouldn’t be. For in-stance . . . credit default swaps are one of the greatest innovations of all time. They give you a chance to hedge both credit risk and interest rate risk. Unfortunately, things were abused and taken to the nth degree.

SW: That points to lax regulation.

RP: Exactly. We know that the CFTC [Commodities Futures Trading Commission] wanted to impose some sort of regulation in 1999, but was talked down by [Federal Reserve Chair Alan] Greenspan and [Treasury Secretary Robert] Rubin. So, there was no clearing corporation, no margin requirements, no declaration that these swaps were insurance contracts. We want the markets to work, we want financial innovation. But if you see a product like credit default swaps—$1 trillion in 1999 and over $60 trillion by 2007—if you see that kind of growth in an unregulated product, as a regulator, you have do something.