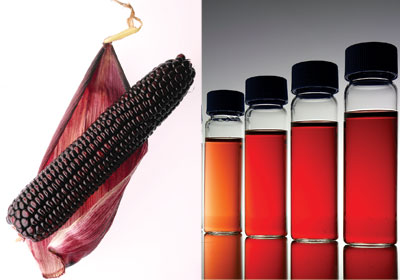 Suntava Takes on Red Dye No. 40

By using purple corn, the company is developing an alternative to red dye number 40.
September 11, 2010

Purple is the color of money at Suntava. Red, too. The tiny St. Paul company, founded in 2007, is developing products including an alternative to red dye number 40 using a proprietary, not-genetically-modified hybrid of purple corn.

Suntava’s founders, entomologists, began investigating and breeding the corn for its resistance to insects. Then they realized that it was also remarkably high in antioxidants called anthocyanins, thought to have anti-inflammatory properties and play a role in preventing cancer and obesity. More, the corn could be a source of natural colorants to replace synthetic food, drug, and cosmetic dyes.

CEO Bill Petrich says Suntava began selling flour from the corn last spring to Zumbro River Brand, a contract maker of snacks and cereals based in Owatonna. Suntava has other nutraceutical and cosmeceutical ingredients in development and a line of Sayela brand red-spectrum colorants that it will pitch to beverage makers and others.

“The big thing for Suntava was in 2007, at the time we started the business, there was a study by [England’s] University of Southhampton that established a link between hyperactivity in kids and synthetic dyes,” Petrich says. On July 20 this year, regulators in the European Union began requiring that foods with certain synthetic colors carry warning labels about the possible effects on children.

Also this summer, the Center for Science in the Public Interest is lobbying the U.S. Food and Drug Administration to ban red dye number 40 and yellow dyes number 5 and 6, citing increased risks of cancer, allergic reactions, and in children, hyperactivity.