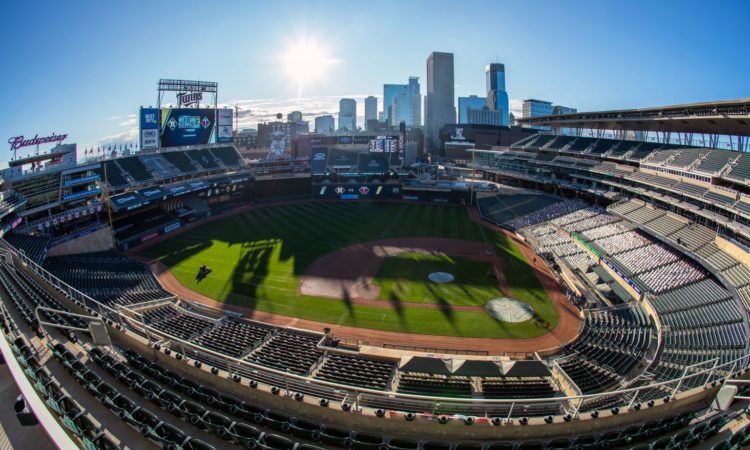 The governor’s latest announcement will “pave the way” for fans to return for in-person attendance on opening day, the Minnesota Twins said in a statement. Jordan Johnson/MLB Photos

The governor’s latest announcement increases capacity limits at bars and restaurants, and permits outdoor venues to operate with a maximum of 10,000 people in attendance.
By Dan Niepow
March 12, 2021

The beginning of the end? Citing a decline in Covid-19 cases and uptick in vaccinations, Gov. Tim Walz on Friday morning announced some of the most significant rollbacks to restrictions on businesses and public gatherings.

Walz’s latest executive order also significantly increases limits on attendance at indoor and outdoor events. Outdoor venues will be allowed to operate with a maximum of 10,000 people, while seated indoor venues will be capped at 3,000 people. That will likely mean the return of concerts, theater performances, and baseball games this spring.

In a statement, the Minnesota Twins said the latest guidelines will “pave the way for the safe return of our fans to Target Field for the upcoming 2021 season, beginning with our April 8 home opener.”

The governor emphasized that Minnesotans should continue wearing masks and practicing social distancing.

“Our vaccine rollout is leading the nation, the most vulnerable Minnesotans are getting the shot, and it is becoming increasingly more safe to return to our daily lives,” Walz said in a statement. “The sun is shining brighter.”

Throughout the pandemic and especially as vaccinations have increased, Walz has been under pressure to roll back restrictions from a number of GOP state lawmakers. Several Republican legislators believe the governor stepped beyond his authority in his pandemic response. In a column in the Star Tribune last week, Majority Leader Paul Gazelka (R-East Gull Lake) quoted former President Ronald Reagan and said Minnesotans are not better off now than they were a year ago. Gazelka and others say the Legislature should have been more involved in the state’s response to Covid-19.

In a media briefing on Friday afternoon, Walz pointed out that Trump and all 50 governors used similar executive powers as Covid cases grew. “It becomes a political narrative that the governor is ruling by fiat, by himself,” Walz said. “I think the angst around the emergency powers will certainly dissipate” once the business restrictions are lifted.

But some businesses in the state still feel uncertain about the governor’s plans, even after Friday’s announcement. The Minnesota Ready Coalition — an assembly of local chambers of commerce throughout the state backed by the Minnesota Chamber of Commerce — said businesses need to know when Walz will lift all restrictions. The group said that the governor’s Friday announcement was “good news. But with President Biden’s announcement that all Americans will be eligible for vaccination by May 1 at the latest, we again ask – where is the administration’s plan to fully reopen our economy?”

While some think Walz has been too cautious, others say the caution is warranted. In a statement, the Minnesota Medical Association noted that the pandemic isn’t over quite yet. “We still have a long way to go – nearly 80 percent of our fellow Minnesotans still need to be vaccinated,” said Dr. Marilyn Peitso, the association’s president. “The virus variants that have been found in the state and across the country demand caution and have the potential to slow and even reverse our progress. We recognize that Minnesotans are tired of this pandemic. Healthcare workers are tired, too. Please help us get over the finish line.”

In a news release, university officials said that students and staff will have “widespread access” to Covid-19 testing in the coming months.

“Given projections on the number of Minnesotans who will be vaccinated, and relying on continued guidance from our public health colleagues, we are increasingly reassured that we can bring students, faculty and staff back to our campuses while effectively minimizing the risk to our community,” said University of Minnesota President Joan Gabel.

The University of St. Thomas, meanwhile, said prospective students could plan to take in-person school tours this summer. University officials are also planning for “in-person, outside commencement ceremonies with minimal risk to graduating students and their families.” Employees are expected to return to campus by August, the school said.