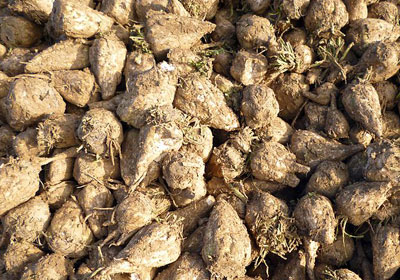 Farms and producers around some Minnesota crops could be crippled if more food companies begin to remove genetically modified crops from their products.
January 07, 2016

You probably didn’t notice the change in your Hersey kisses this Christmas season: They were made without beet sugar. But it’s a change that could dramatically alter one of Minnesota’s big agricultural outputs.

The Star Tribune reports that Hersey Co. previously used sugar from both sugar cane and sugar beets, but opted against using sugar beets going forward due to the fact that sugar beet seeds are genetically modified to withstand the active ingredient in RoundUp herbicide. Consumers are increasingly concerned about the effects of genetically modified crops.

The concern with the change is that other food companies might follow suit and switch away from beet sugar altogether, crippling farmers and producers alike. And even if beet sugar farmers wanted to stop growing genetically modified plants, they’d be unable to – the seeds aren’t readily available anymore.

“The supply of seed that is not genetically modified is extremely outdated and just not a viable option at all for raising sugar beets today,” American Crystal Sugar CEO David Berg told the Star Tribune.

The entire story can be found here.