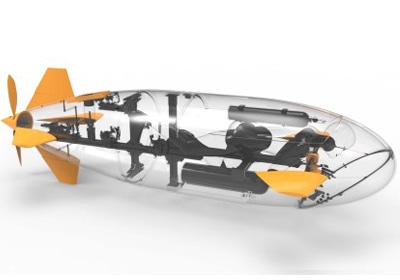 The vessel’s designers were able to cut costs and shorten the build time using 3D-printed parts.
May 22, 2016

Stratasys 3D-printed parts have already helped a rocket shoot deep into space. Now, the company’s parts are assisting the exploration of another frontier: the deep seas.

Six engineering students at The University of Warwick in Coventry, United Kingdom have built a 3D-printed submarine called the Godiva 2. The watercraft is said to be the “most 3D printed vessel on the grid,” and it will compete at this years European International Submarine Races.

Project leader Josh Dobson said in a statement that using the Fortus 3D printer by Minneapolis-based Stratasys offered a number of benefits in the submarine’s construction. “Using the technology, we were able to 3D print final parts for the submarine 90 percent faster than using conventional manufacturing and also saved £2,000 to £3,000 [or $2,889 to $4,334] in manufacturing costs,” he said. “These are parts that can perform in the harshest waters, which is incredible given the speed and cost at which they can be produced.”

Specifically, Dobson’s team 3D printed the fins, propeller shroud and blades, as well as a number of fixings, housings and internal steering components of the Godiva 2. Compared to traditional methods of cutting the pieces from a solid piece of metal, Dobson said the team was able to reduce material wastage by 75 percent by 3D printing the parts.

“For example, our fixing feet are an incredibly complex piece of geometry and have been 3D printed to perfectly fit the hull at virtually no additional cost,” he added.

In the case of the rocket designed and launched by the United Launch Alliance last March, the team found similar advantages (trimmed costs and time saved) when 3D printing parts.

This week, Stratasys posted a $200 million year-over-year improvement in its first quarter report. Despite still being in the red, the company appears to have stopped the severe hemorrhaging that led to its $1.4 billion loss last year.