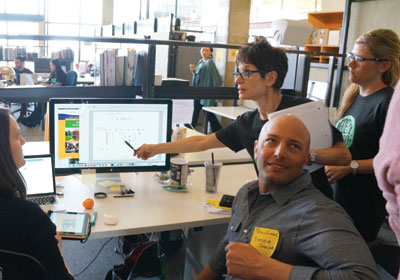 One Heartland has a great mission: To provide a camp experience for kids and teens who often face stigma, including those affected by HIV/AIDS, in transitional housing, LGBT youth and others.

But it was that very mission that was tripping them up. Cohesively describing both what the organization does, along with its values of creating community, educating and fighting stigma, discrimination and social isolation is a difficult task.

So in April, One Heartland turned to StoneArch Creative, a Minneapolis-based marketing agency to do a “RedEye Rebrand,” an annual 24-hour, pro-bono branding challenge for nonprofits in need. The nonprofit was chosen this year after an application and public voting contest.

“One Heartland is such an amazing organization doing profound work,” StoneArch president Jessica Boden said. “They just needed a little help telling their story in a more impactful way.”

The rebrand, which finished rolling out in the last week, includes a new “branding identity,” social media strategy, a communications plan, marketing videos and posts, brochures and an updated website (which is now live).

“The night was amazing,” said Patrick Kindler, executive director of One Heartland.
“It was like clockwork and every time we turned around, there was something new and amazing for us to see.”

Though working for an entire day is strenuous, StoneArch CEO Jerrold Gershone said during a previous rebrand that the fast and frenzied nature of it helps cut through bureaucratic hurdles that typically stymy rebranding.

“It gets everyone on our staff and in the nonprofit really energized,” he said. “And the Rebrand challenge really lets us make decisions quickly without going through layers of approval.”

Last year, the agency helped rebrand Magic Arms for the World, a nonprofit that helps children with a rare medical condition move their arms for the first time with the help of 3D-printed equipment.

Kindler said the night was a collaboration that better prepared the nonprofit to share its story and fulfill its mission. He believes it will help bring in more campers and make outreach to donors easier.

“They exceeded every expectation that we could ever have dreamed,” he said. “I struggle to hold back the tears when I think about what was accomplished and what we left with.”