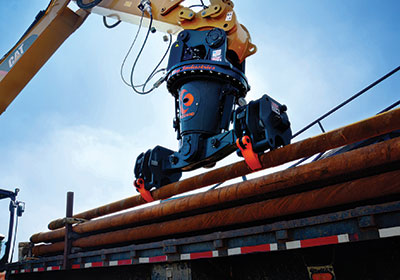 A National Association of Counties report recently noted that while Minnesota as a whole was recovering from the Great Recession better than most states, only nine of the state’s counties had seen their economies bounce back to their pre-recession levels. Four of those nine were in northwestern Minnesota—Clay, Marshall, Pennington and Polk.

At least part of that resilience is likely due to the fact that those counties have a remarkably strong manufacturing base. Roseau County, also in Minnesota’s northwest quarter, is home to Marvin Windows & Doors, along with the main Polaris plant. Several northwestern Minnesota manufacturers supply components to Polaris, as well as to Arctic Cat in Thief River Falls, two of the world’s largest manufacturers of snowmobiles and all-terrain vehicles.

Talk to some of the manufacturers in this part of the state, and you’ll hear about a sector that grew and thrived alongside the region’s wheat and timber.

Mike Delisle, general manager and sales manager for Mayo Manufacturing in East Grand Forks, says one of the big reasons for northwestern Minnesota’s strength in manufacturing is that the people there have a long history of innovation. “You can go all the way back to Steiger Tractor in Thief River Falls,” he says.

Steiger Tractor was founded in the late 1950s to manufacture a high-powered four-wheel drive tractor developed by Red Lake Falls farmers Maurice and Douglas Steiger. The company was purchased in 1986, and the brand name now belongs to CaseIH. But many manufacturers still cite Steiger Tractor with reverence as a business that embodied the homegrown ingenuity behind northwestern Minnesota manufacturing.

Delisle’s company started as a repair shop in the 1950s, evolving into a manufacturer of conveyors, pilers, loaders and related equipment for potato growers in Minnesota and North Dakota. It also supplies, through dealers, to customers in 20 other states and provinces in North America. In addition, Mayo Manufacturing exports some of its equipment, though Delisle says that’s a small part of the company’s volume.

In 2006, Mayo merged with Harriston Industries in Minto, N.D. “We had complementary products,” says Delisle, who bought Mayo with his brother, Mike, from their parents in 1993. “A lot of the machines we build worked with what they build,” he says. By combining the Mayo and Harriston dealer networks, “we were able to complete a far more extensive product line.”

The merger has worked out well. “We have grown quite nicely over the last 10 years,” Delisle says. “That doesn’t mean we grow every year. We have our ups and downs because we follow the economics of agriculture.” But overall, he believes that the reason the area’s doing well is because of agriculture.

So does Rick Trontvet, who maintains that the farm-bred work ethic has produced employees who are hard-working and “willing to go above and beyond for the customer.” Trontvet is vice president of human resources at Digi-Key Corp. in Thief River Falls, as well as chair-elect of the Minnesota Chamber of Commerce board. As one of the world’s largest distributors of electronic components (it sells mostly small-quantity orders), Digi-Key isn’t a manufacturer per se, though it does perform some light assembly of components. But Trontvet notes that Digi-Key hires “a similar type of employee with a similar wage and benefit structure.”

The region’s manufacturers “were born out of the necessity of living,” Trontvet says. Marvin’s windows for barns were adapted to the harsh northern climate, and in turn became the basis of an international manufacturing firm. Snowmobile pioneer Edgar Hetteen’s original company, which manufactured hoists and derricks, built a machine that would help farmers cross vast snowy fields. It would become a sporting vehicle for hunters and recreational riders, and the basis for snowmobile manufacturing at Polaris and Arctic Cat.

Look at some of the other manufacturers in the northwest, and you’ll see hardy, hearty products. There’s Mattracks in Karlstad, which makes rubber track conversion systems that allow trucks, ATVs and other vehicles to chew through mud, snow and difficult terrain. In Stephen (about 20 or so miles northwest of Thief River Falls), Terog Manufacturing’s Black Ace lines of sprockets, implement hitches and torque limiter clutches are used for power transmission applications in agriculture, construction and mining.

Working with their hands

Not all the northwestern Minnesota manufacturers that are flourishing are located in the far corner of the state. There’s TEAM Industries, which is headquartered in Bagley (located 25 miles west of Bemidji) and employs roughly 1,000 people working in five facilities. (It has another 100 employees in a North Carolina location.) TEAM engineers and manufactures a wide variety of components primarily for recreational and commercial vehicle companies, including Arctic Cat, Toro and John Deere.

Though Don Ricke founded the company in Cambridge, (about 45 miles north of Minneapolis), “his plan was to move to rural Minnesota to create jobs,” TEAM’s director of corporate development Jim Russ says. In 1984, Ricke opened a facility in Audubon, close to Bagley, where he grew up. To Ricke, the advantage of being in this part of the state is the rural background of the people he’s hired, “folks who knew how to work and to use their hands,” as Russ puts it. Ricke’s son David is now CEO and president of the company, with capabilities that include high-speed aluminum machining, die-casting and assembly.

In Bemidji, LaValley Industries has flourished by following a distinctive production model. The company was founded in late 2006 by Jason LaValley and his father to make and sell the Deckhand, an excavator-mounted pipe handling attachment. Jason LaValley, CEO and president, invented the Deckhand after witnessing an employee injured at a pipeline-drilling site. “A pipe rack broke as a result of handling pipe with chains and straps,” says Jorge Prince, chief financial officer.

The Deckhand is designed to more reliably move and position pipe—flexible, plastic, concrete—used by utilities, construction companies, municipalities, and oil and gas businesses. LaValley Industries sells its products worldwide through distributors. “Since 2010, we’ve increased sales 100 percent each year,” Prince says. “This year, we’ve had our best first five months ever.”

LaValley Industries is primarily an assembler, subcontracting most of its fabrication to regional vendors. Though the company employs about 30 directly, “we’re creating another 50 to 100 jobs, easily,” Prince says. About 70 percent of the total production is done in Minnesota. Bemidji is a good location for the company because the company sells a lot of product in Canada, Prince says. But, he adds, “the “biggest reason we’re in Bemidji is because we’re from Bemidji. Both Jason and I grew up in the area, and we’re very committed to seeing greater opportunities in our community.”

With the decline in the timber industry in the early 2000s, most of the manufacturing around Bemidji decamped. Still, “there are a lot of good blue-collar workers in our region, and many of them were displaced when the wood industry went away and had taken jobs in service or tourism,” Prince says. He adds that LaValley Industries has been “very blessed to pick up those folks and put them back into manufacturing. A lot of them have been key to our success.”

Almost 22 percent of the jobs in Minnesota’s northwest region are in the manufacturing sector. The region consists of seven counties—Kittson, Roseau, Marshall, Polk, Pennington, Red Lake and Norman. Here are some key numbers for the region:

For example, a member of the company’s design team owned his own automotive business. He went back to school and got a two-year manufacturing engineering degree. “He’s become one of our best designers,” he says. One of the programs LaValley uses is Solidworks, a computer-aided design and 3D modeling program. The employee has gotten so good that he’s on the product’s state advisory team. “When they have a problem they can’t figure out,” Prince says, “they call him.”

Getting and providing help and support is the raison d’Ãªtre of the Highway 2 West Manufacturers’ Association, which covers a corridor that ranges west to east from East Grand Forks to Bemidji and about 60 miles north and south of U.S. Highway 2. The association, with which about a couple hundred businesses are affiliated, meets four times a year. Each meeting includes a tour of a facility and a speaker covering a subject of interest to manufacturers. (The May meeting featured Gardner Carrick, vice president of strategic initiatives for the Manufacturing Institute. His topic was the impact of disruptive technologies on manufacturing and the workforce.)

Digi-Key’s Trontvet, a charter board member of the association, is quick to note that this isn’t a political group. “It’s more about benchmarking and camaraderie,” he says, adding that the association members often share ideas and best practices, whether it’s managing health insurance costs, setting up safety programs or introducing lean manufacturing techniques. (A similar organization, the Northwestern Minnesota Manufacturers Association, exists farther north; its members include Marvin Windows & Doors, Polaris, and ANI Pharmaceuticals.)

Much of the northwest remains constrained by its labor market size. Mayo Manufacturing’s Delisle notes that when his company needs to hire, it’s competing with other manufacturers and companies in the oil fields of North Dakota. TEAM Industries’ Jim Russ notes that 20 years ago, it wasn’t difficult to find good employees. But now there’s a shortage of qualified manufacturing employees, so “you have to get creative,” he says.

Accordingly, TEAM Industries and the TEAM Foundation established a scholarship program five years ago for study in technical colleges. Since 1997, TEAM and its foundation have been giving manufacturing technologies to area high schools for technical programs, and they’re also developing internship and apprenticeship programs. “Hopefully, when they’re done with their college pursuits, they’ve found that TEAM Industries has been a good place for them,” Russ says.

One of the top competitors for employees in northwestern Minnesota is Digi-Key, which added 520 jobs last year—the biggest hiring year the company has ever had, Trontvet says. In Thief River Falls, he adds, a big part of the problem has been finding housing for new hires, particularly those from outside the area. There have been cases where a candidate has turned down a job because there’s no suitable place to live.

“We’re a small community, unlike Fargo or Duluth, where [developers] can see that there’s a diverse population,” Trontvet says. “Even though our businesses are booming, there’s a hesitation” on the part of developers to build new homes and rental properties. Trontvet praises the city for purchasing land and preparing the infrastructure in order to make it shovel-ready for new residences.