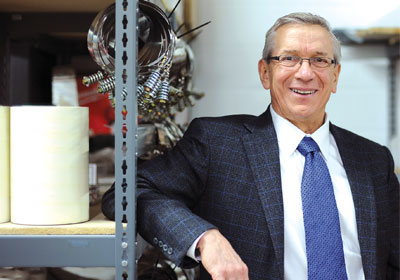 Though utility plant boilers are typically the size of a house and cost millions, they have something in common with their smaller residential cousins: They break. And when they do, Eden Prairie–based HRST makes money.

As the company’s market expands beyond the United States, it’s been growing fast, ranking about midway up on Inc. magazine’s 2009 Fast Growth list of 5,000 companies nationwide. HRST’s 2008 revenue, $7 million, was up 22 percent over the previous year’s.

Founded in 1998, HRST (for Heat Recovery System Technology) specializes in boiler and heat recovery technologies. Many power plants generate electricity by burning natural gas to turn a turbine. Exhaust from this process is about 1,000 degrees, so power plants typically put the exhaust in a boiler, where it heats water into steam that then powers a second turbine. The two-step operation “is a very efficient process for generating electricity,” says HRST President Robert Krowech, who began the company primarily as a consulting firm.

Though the two-step energy recovery process is common to most power plants that use natural gas, the actual systems are custom designed. HRST makes about 30 percent of its revenue by consulting with power companies about plant design and operation, and by recommending repairs or replacement when boilers break down.

After a few years of consulting, Krowech and his colleagues—the company now employs about 30—noticed that heat recovery boilers often broke in consistent ways. So HRST began designing and selling products that fix common boiler problems. That work now supplies 70 percent of the company’s revenue.

Its first product was a penetration seal designed to be more durable than existing ones. A larger, more recent product is HRST’s Shockmaster economizer. An economizer—the part of the system that heats water to high temperatures—often leaks or develops cracks in its tubing.

The Shockmaster, says Scott Wambeke, HRST’s manager of inspection and training groups, “is a replacement part that’s much harder to break using the thermal cycle.” It lets the same heating and cooling process take place at much lower pressure. A conventional economizer might last four to six years; HRST’s are designed to last up to 20.

Krowech is confident that power plants will have an ongoing need for his company’s services. For one thing, he says, “lots of equipment is just reaching midlife.”