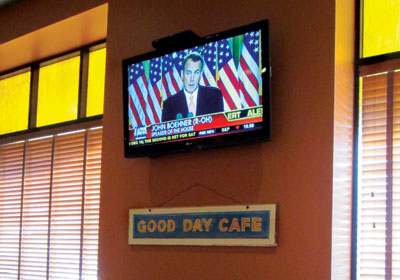 Good Day CafÃ© is the business breakfast hub of the west metro. The constants: fast service, occasional lines, everyone from suits to seniors, and FOX News on the restaurant’s sole TV, overlooking its coffee bar and waiting area. “We get negative comments every day,” one server told me, “written on people’s credit card slips.” Requests to change the channel are typically turned down.

For consumer businesses, it’s always been a no-no to provoke customers with things not central to your product or service. This cardinal rule tends to be broken when it comes to religion and politics, where small businesspeople can be hard-pressed to restrain themselves.

That the Good Day TV gets a rise out of left-leaning diners should be no surprise. The restaurant's late founder, David Webb, saw FNC as a statement of his beliefs and didn’t mind tweaking the sensitive. “He saw the culture as quick to outrage and believed our job was just to offer good food and service,” says Webb’s son, David, who now controls the business.

When Webb passed away two summers ago, the decision was made to leave Fox as the default station as a tribute to the founder; it continues to provoke on a daily basis. “We had one lady,” says General Manager Jeff Peterson, “who complained that the blinds were closed [Good Day has a serious glare problem on sunny days] and Fox News was on. I said I couldn’t change either. She walked out saying, “Closed blinds, closed minds.”

Perhaps, but the omelets are dynamite.