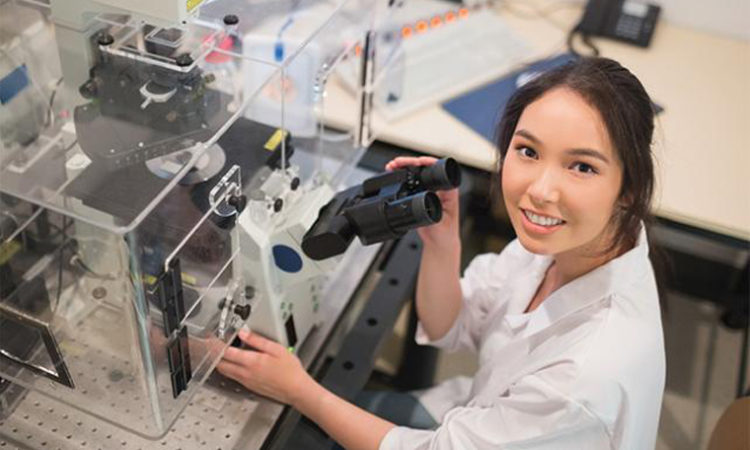 Foreign-born residents, the report argues, are critical for the stateâs labor market and that local business leaders desperately need them to fill jobs and maintain economic growth. ( Photo by DEED)

Authored by two economists from the Department of Employment and Economic Development, the report chronicles the past and present of immigration trends to the state.
By Ibrahim Hirsi
February 13, 2018

Goodwill and compassion aside, Minnesota needs more immigrants to fill job vacancies, sustain economic growth and expand the labor market, which has been shrinking over the years as baby boomers continue to age out of the workforce.

That’s the conclusion of a recent report — “Immigrants and the Economy” — that chronicles the past and present of immigration trends to the state and demonstrates how foreign-born workers have contributed to the labor force growth in recent decades.

Authored by Steve Hines and Cameron Macht, economists at the Minnesota Department of Employment and Economic Development (DEED), the report also sheds light on the need to keep the immigration pipeline open as means of combating the looming workforce shortage in Minnesota.

The release of the “Immigrants and the Economy” comes at a time when some Republican leaders and activists in Minnesota and nationwide are pushing back hard against immigration and calling for plans to limit the stream of legal immigrants into the United States.

Contrary to some of that political rhetoric, the report argues that foreign-born residents are critical for the state’s labor market and that business leaders in Minnesota desperately need them to fill jobs and maintain economic growth.

“At this point, more of our recent workforce growth has been driven by immigrants,” said Oriane Casale, assistant director of the labor market information office at DEED. “So you can see the importance of immigrants; [they’re] … adding vitality to the labor force.”

Casale is referring to the more than 450,000 foreign-born residents — or about one in every 12 people in the state — most of whom have made Minnesota their home in the past 20 years, according to the report.

To put that in numbers, workforce participation rates for all residents in Minnesota was 71 percent in 2006, Hines and Macht note in the report. Ten years later, though, that number fell to 69 percent for native-born workers and jumped up nearly 73 percent for foreign-born workers.

“Put another way,” the report adds, “the foreign-born labor force expanded by 40 percent from 2006 to 2016, compared with 2.4 percent growth among the native-born workforce.”

When it comes educational attainment levels, a large segment of foreign-born adults (33 percent) who are aged 25 years or older now have a bachelor’s degree or higher, a number that’s parallel to that of native-born Minnesotans.

The data explain why so many immigrants are concentrated in service, production and transportation occupations. In fact, while 24 percent of native-born Minnesotans have office and sales jobs, only 15 percent of their foreign-born counterparts have those jobs.

“These gaps are even more pronounced for foreign-born workers who are not citizens, who presumably have entered more recently,” the report states, adding that nearly 46 percent of this group are in service, production, transportation and material moving occupations. 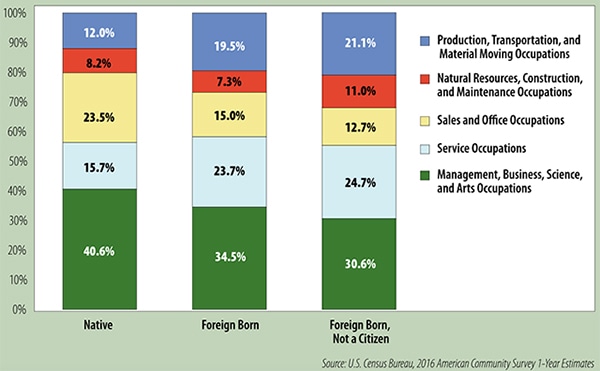 Occupation of employment for Minnesota workers by place of birth and citizenship status in 2016. (Source: U.S. Census Bureau)

Even in occupations with large concentrations of immigrants, there’s still a “critical workforce shortage” in the state, according to the report. For example, employers in the construction, home health and personal care are struggling to find workers to fill job vacancies.

“Diminished labor force growth has been obvious in recent years, and it is expected to fall further in the years ahead,” the report states. “Job growth will be constrained by the lack of an available workforce, especially in areas of Greater Minnesota that also have a lower share of both immigrants and minorities.”

Casale said the shortage is driven in part by the aging population of the native-born workforce as well as the growing economy, which is producing more jobs than there are people to fill them.

To address the issues, said Casale, Minnesota needs to open up its doors for more immigrant workers and integrate those already here into the labor market. “These are occupations — personal care aides and home health aides — that we know immigrants are just a critical piece of,” Casale added. “Without that population filling these positions, many, many people in the state are going to suffer.”