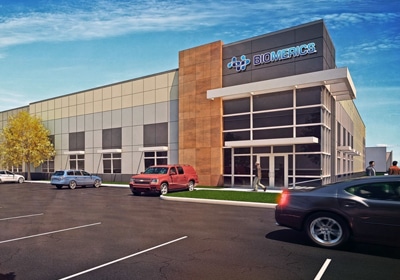 The medtech company will receive the state funds once it has accomplished its promise to create 120 new jobs at the site.
September 17, 2016

The state’s Department of Employment and Economic Development said last week that it would provide a $460,000 grant to be used toward Biomerics LLC’s Brooklyn Park expansion.

Biomerics, which is a polymer solutions provider for the medical device industry, announced plans in June to move to a new 50,000-square-foot facility near the intersection of Highway 610 and 169.

The Salt Lake City-based company currently employs 45 workers at its existing operations in Rogers. All of those workers will relocate to the Brooklyn Park plant, Biomerics said, while it looks to create 120 new positions. The company has said those jobs will be created over a three-year span and would provide an average hourly wage of $32.24.

“With [Biomerics’] $6.5 million investment and 120 new jobs, the company is making a major commitment that will add to Minnesota’s reputation as a national leader for innovation in the medical device industry,” said DEED commissioner Shawntera Hardy in a statement.

DEED will provide the nearly half-a-million-dollar grant from the state’s Job Creation Fund. Stipulations of the program require businesses to create at least 10 full-time jobs and invest $500,000 toward a project in Minnesota in order to qualify. Biomerics will receive the grant once its new employment promises have been met.

Construction of the new facility is ongoing, but it is expected to be operational this November.