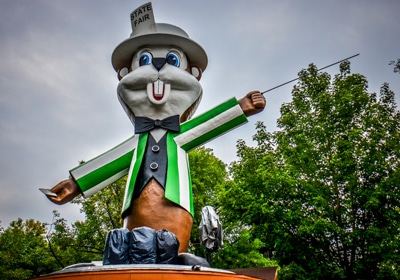 Experiencing the Great Minnesota Get-Together is going to cost you an extra dollar in 2017.

Minnesota State Fair tickets for adults (age 13 to 64) will be $14 when the gates open in August. Last year, adult tickets were $13, which came after a similar rise of one dollar in 2014. Parking rates will also increase to $14 for regular vehicles and $7 for motorcycles.

State Fair general manager Jerry Hammer told MPR that the cost-to-value ratio for attendees is still quite good. “When you look at our operating expenses, last Fair we spent almost $18 for [each person] that went to the Fair,” he said.

Based on Hammer’s statement, the Fair’s operating expenses would have topped $34 million in 2016 given the Fair’s all-time-high attendance record last year of 1.9 million visitors.

State Fair board members had mulled over a two dollar uptick to ticket prices, but concerns over losing public trust curbed the proposal. “From a marketing perspective,” Hammer said, “two dollars could be a challenge.”

Additionally, the State Fair board decided to spend $8 million in capital improvements to the Fairgrounds.

Among the improvement projects are a new elevator at the west side of the Grandstand, upgrades to the Swine Barn, two new information booths, a new performance space outside of the Education Building, and renovations to the interior of the Creative Activities Building. Furthermore, a portion of the interior retail space in the Upper Grandstand is being transformed into “The Veranda,” a mixed-use shopping and dining center.

All of those projects, as well as some upkeep projects throughout the Fairgrounds, will cost $4.6 million. The remaining $3.4 million will go toward improvements in the State Fair’s utilities and transportation infrastructure.

As a self-supporting agency, the State Fair covers all costs for improvement projects using operating revenue and grants from the State Fair Foundation.

The 2017 State Fair starts on August 24 and runs through Labor Day, September 4.