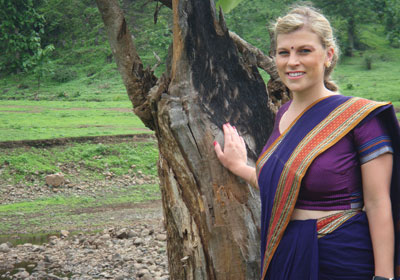 Esbee’s founder lands a leading role on a business trip to India.
November 11, 2010

Yes, Stacy Bee is expanding her Minneapolis PR firm, Esbee Public Relations, in India. She’s setting up a new creative services and Web services division in Mumbai. But reached there by phone in September, Bee is busy with other work: finishing the voice dubbing for her role in the feature film ala Aai Vhayacha Aahe (I Want to Be a Mother). Bee was recruited for the film when she walked through her hotel lobby.

“The father of the little boy who was cast for the movie was staying at the same hotel,” Bee says. “He approached me and said, ‘The director has been casting about eight people to play the mother to my son . . . and there’s no one who even comes close to the script or that I think my son will react to.’”

Bee was cast as an American who travels to India to hire a surrogate mother. The film examines the culture clash and ethical issues being widely discussed in India today, as hundreds of tourists travel there each year to find surrogate mothers at a discount: about $23,000, or a fifth the going rate in the United States, according to Time.

Bee had no previous acting experience, but says her media training for her public relations business helped her feel comfortable in front of the camera. “I really got into that it was an adventure,” she says. “It was almost like I was living the role.”

Stacy Bee says other businesspeople in India encouraged her to take the movie role she was offered: “Everyone will know who you are,” they told her—great publicity for her expanding PR firm. The film, being released in India in December, could come to the U.S. through film festivals.