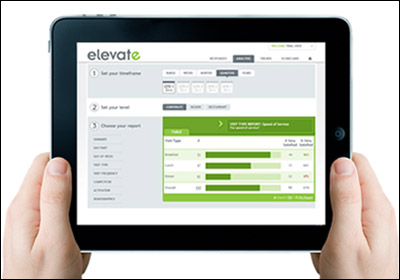 Elevate Research says its customer feedback app is simple for retailers and restaurants to operate, and its cash infusion will “fuel the expansion of its sales and digital marketing efforts worldwide.”
August 02, 2014

Elevate Research, Inc., which officially launched in January, said Wednesday that the funding round was led by investment firms Confluence Capital and Icon Venture Partners, along with additional support from local angel investors. Confluence’s Ryan Broshar and Icon Venture's Jeff Hinck are joining Elevate’s board.

Elevate’s app is centered around a customer satisfaction survey, but it also provides a platform for retailers and restaurants to communicate directly with consumers. The startup says its product is differentiated from the competition in part due to its simple implementation.

A guided setup shows users how to insert their company information, and customers can customize pre-made survey templates. Through the online survey, companies may ask respondents to sign up for their loyalty programs, and they can also direct respondents to Yelp to write reviews, or to their social media pages.

Restaurants and retailers can also receive notifications when customers post complaints, allowing them to promptly respond. The app also includes real-time reports that measure positive and negative customer feedback at each location.

Elevate was cofounded by Joe Stanton and John Cohoon, both of whom have prior experience building customer feedback programs, Stanton told Twin Cities Business on Wednesday. He said that the Elevate concept was conceived to serve smaller restaurants and retailers that needed an affordable feedback product, but larger organizations have been attracted to the platform as well.

Elevate's current client roster includes local brands like Dunn Bros. Coffee, My Burger, and D. Brian's Deli, as well as other customers throughout the country and one in Malaysia, Stanton said.

“We set out to create a customer feedback platform so easy to set up that you could do it yourself and so lean that you could try it for free,” Stanton said in a statement, referring to the company’s free 30-day trial. “Plus, it had to be tailored to the specific needs of restaurant and retail operators.”

Where The Money Goes

Elevate said it plans to use the bulk of its recent investment to “fuel the expansion of its sales and digital marketing efforts worldwide.” Some of the money will also help Elevate integrate its product with other platforms, such as mobile payment systems, restaurant reservation software, and online shopping carts.

The company also plans to extend its platform to a new audience—hotel operators—beginning this fall.

In addition to the $500,000 it recently secured, Elevate is in the running for tens of thousands of dollars in prizes in this year’s Minnesota Cup. It is among 70 semifinalists vying for a share of $300,000 in prizes, and it was named a semifinalist in the entrepreneurial contest's high-tech division. Finalists for each division will be announced on August 18.