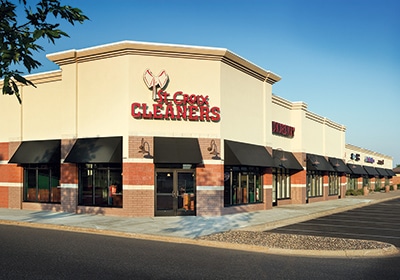 Going without harsh chemical solvents and buying its own cleaning facility have been key to its success.
August 04, 2014

[This is one of three Spotlight stories from the August 2014 issue that focus on the theme “Sustainable Policies = Steady Profits.” Also read about Chowgirls Catering and 3 Companies That Are Cleaning Up The Twin Cities.]

After spending 15 years in corporate America, Dave Nemec was bitten by the entrepreneurial bug. His search for a small business led him to a modest dry-cleaning operation in Stillwater with two locations. At the time, it hardly seemed like a path to riches.

By then, St. Croix Cleaners had grown to five locations, and Nemec was looking to build a new centralized plant for the business. The dry cleaning industry has historically been considered a “dirty” business because of the harsh chemical solvents that traditionally have been used, but today many in the industry are moving away from the use of the perchloroethylene, known as “perc,” because of environmental concerns about the chemical.

“We visited some other plants that were green. There was no chemical smell around the clothes or the employees,” says Nemec. “To feel the clothes after they’ve been cleaned using a green approach, they’re much softer to the touch. … and more gentle to fibers.”

Clothes dropped off at any St. Croix Cleaners location are sent to the 15,000-square-foot plant in Stillwater for cleaning.

“We own our own building. It was our opportunity to adopt green technology. It was very much a calculated risk on our part,” says Nemec. “The equipment and technology is so expensive that everybody uses a centralized processing plant.”

As Nemec studied the trends of the dry cleaning industry, it was clear to him that he should move toward using alternative solvents.

“I was very aware of the evolving industry that I was in,” he says. “California at that time was really leading the way in really disallowing people to use perc. It’s a possible carcinogen.”

The state of California voted to ban dry cleaners from installing new perc machines in 2007, and the law outlined a timetable for phasing out older machines.

“For the most part, people aren’t buying new perc machines,” says Jon Meijer, director of membership for the Laurel, Md.-based Drycleaning & Laundry Institute International. Across the United States, Meijer estimates that 60 percent of dry cleaners are still using perc, however.

The City of Minneapolis now offers financial incentives for dry cleaners to switch from perc to green materials.

“It’s a hazardous material,” says Patrick Hanlon, environmental initiatives manager with the City of Minneapolis. “The industry is going away from it.”

Nemec says that St. Croix Cleaners has expanded both through its own growth and through acquisitions. By 2010 the company had grown to 10 locations; then it acquired White Way Cleaners, adding nine locations. All of the White Way locations will be rebranded under the St. Croix Cleaners banner by the end of the year.

In addition to using eco-friendly solvents, the company also uses biodegradable bags and recycles both bags and hangers. The City of Minneapolis presented the company with a Green Business Award in 2013.

This year St. Croix Cleaners has added two new locations: one on the skyway level of the new Soo Line Building City Apartments in downtown Minneapolis, and another in the Penfield project in downtown St. Paul, a mixed-use project featuring apartments and a Lunds grocery store. The company recently closed a downtown Minneapolis location in the Campbell Mithun Tower.

The Soo Line location offers another new twist: Although it will be staffed during limited hours, the location will offer an automated kiosk.

“It really has been a great partnership. They’ve welcomed the opportunity to grow with us,” says Aaron Sorenson, a spokesman for Lund Food Holdings. “They very much align with our mission. Like us, they’re a local, family-owned company.”

Looking ahead, Nemec is hoping that St. Croix Cleaners will reach close to $5 million in sales this year. Says Nemec: “We want to continue to be a thriving, growing business.”