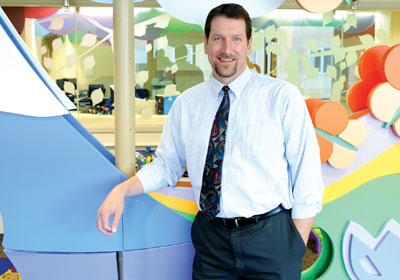 Having decided to devote the rest of his career to underserved medical markets, mechanical engineer Brad Slaker looked first at prospects in the developing world. Instead, he discovered an opportunity right here in the U.S., in the pediatric medical device industry.

“As you go toward younger and smaller children, the more gaps exist in available devices,” Slaker says. “Physicians often modify or jury-rig adult devices. There’s a lot of making do with what’s available.”

Slaker has worked in the Twin Cities medical device field for more than two decades, with stints at Boston Scientific and Zimmer Spine. In 2008, he started DesignWise Medical, a Minneapolis-based nonprofit design shop for niche medical devices for newborns and young children.

The small size of the pediatrics market required Slaker to think outside the traditional for-profit mold to design a business model that relies on volunteers. Medical professionals and parents help Slaker determine the need for new devices, while volunteers and students design the products. The company has worked with nearly 200 volunteers, both students and professionals, who’ve donated more than 21,500 hours.

One DesignWise product is a mask and filter system for nebulizers, which are devices that administer inhaled medications in the form of a mist. Slaker’s group designed this product for a physician at Children’s Hospitals and Clinics who wanted to test the therapeutic effects of a particular chemical agent to induce coughing. Traditional nebulizer masks would have allowed the agent to escape into the atmosphere, irritating the eyes of the patients and their caretakers.

DesignWise is currently conducting an electronics project for Children’s involving in-hospital blood oxygen monitors. These monitors sound an alarm alerting hospital staff that an infant’s blood oxygen is outside the normal range. DesignWise is developing a closed-loop feature for these monitors that would adjust oxygen delivery automatically, instead of depending on the response times of hospital personnel. The closed-loop oxygen system could have a huge impact on premature infants, says Andrea Lampland, a neonatologist at Children’s.

Another DesignWise project, the Overnight Pediatric Oxygen Delivery system (OPOD), eliminates the need for oxygen masks and nasal cannulas that need to be taped to a child’s face at night. An open tentlike structure fits over the child’s upper body. Thermal sensors inside the OPOD detect where the child’s head is and directs oxygen toward the child’s nose and mouth. If the child moves out from under the “tent,” an alarm notifies caretakers.

Developing the OPOD has required the assistance of 29 students and 10 professional volunteers; William Mitchell College of Law students helped with patent filing. The development cost so far, according to Slaker, is $18,000, compared with more than $154,000 had the volunteers received a market rate.

“The potential for fiscal return is not there for the for-profit companies,” Slaker says. “Our target is to be able to develop products for about a fifth of the [conventional] cost.”

Students who work with the company get hands-on, real-world experience. For instance, design students from the University of Wisconsin–Stout recently shadowed pediatric intensive care nurses to identify gaps in the device market before developing product concepts, according to Jennifer Astwood, an industrial design professor at Stout.

Pat Gerber, a former medical device developer who’s now a software engineer for Bloomington-based Toro, donates four hours a month to mentor student volunteers. “I love working with the engineering students,” Gerber says. “They are so eager to learn.” Most of DesignWise’s funding to develop products to date has come from individuals, including Slaker. The company is seeking corporate sponsors and partners to bring its first products to market.

Slaker says that calls from local and national volunteers continue to pour into DesignWise. “The Twin Cities is one of the few places where a volunteer medical device design company could fly,” he says.