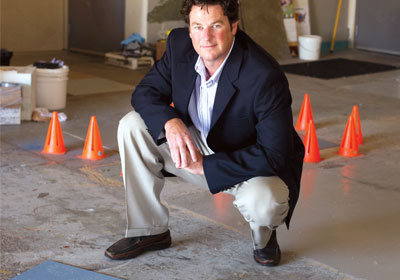 A little more than five years ago, Patrick Ilfrey was looking for a protective coating for residential insulation. He found it in the back of a truck—a substance called polyurea, which is used to protect truck beds from damage. Ilfrey also used it to found a fast-growing company called Citadel Floor Finishing Systems. The six-year-old firm’s revenue was just under $10 million in 2010, and it’s on pace to exceed that in 2011.

Citadel’s coatings “protect concrete against water, salt, oil, and other common products on an industrial or garage floor,” Ilfrey says. “It doesn’t require nasty solvents for application, and it doesn’t scratch or wear off, even in warehouses with forklifts and other heavy machinery running over it all the time.” Ilfrey says that a number of restaurants are adopting concrete floors instead of standard tile because of Citadel’s polyurea coatings. “Mold can’t grow on it, so our product is FDA compliant,” he says. And though Citadel’s coatings are “typically four times stronger than competing products,” Ilfrey notes that they’re “cheaper and easier to maintain than tile—no stripping and rewaxing needed, just a plain wash. We also have coatings specific to each part of a restaurant—nonslip in the kitchen, and a new one that makes a concrete fl oor look like marble for entryways and main floors.”

Citadel grew out of Ilfrey’s other company, a Blaine-based basement and home restoration business called Waterproofi ng, Inc. About six years ago, looking for a coating over insulation that could be applied year-round, he developed a easy way to apply polyurea: “Then I thought, ‘Why not use it on concrete?’”

In 2007, Ilfrey took the product to the world’s largest concrete trade show, in Las Vegas. “We had a picnic table in the parking lot,” he recalls. This past January, the company had a prominent display in a main hall. In between those appearances, Citadel has built acceptance primarily through word of mouth among architects and contractors.

Garage Pro, a custom garage interior company in North Dakota, uses nothing but Citadel’s products when sealing floors. “Epoxy is guaranteed to fail within one to two years,” manager Darin Martell says. “I have no doubt that Citadel’s coating will outlast its 20-year warranty.”

For the nonprofessional, do-it-yourself market, Citadel has introduced a coating under the brand Rock Solid Floors. It’s now available at Lowe’s and Menards; Ilfrey says that his company also is in discussions with Home Depot. Rock Solid recently signed a distribution deal with Hirschfield’s, which will help Citadel expand its network of professional contractors.

Meanwhile, Ilfrey has been courting international buyers, “because not everyone was going through a recession,” exhibiting at Europe’s largest concrete show, among other marketing efforts. In 2010, international sales— markets include Brazil, Australia, and Mexico—accounted for approximately 35 percent of Citadel’s revenue.

Waterproofing, Inc., still exists, but Ilfrey is focusing on Citadel. “In five years, we’ll be entrenched in retail outlets, including automotive shops,” he predicts. “We’ll have water remediation products on the market, and an even more extensive global outreach.”