Sample of a data graphic possible through Inhabit and Sportradar. (Photo courtesy of Sportradar)

New York-based Arkadium’s InHabit technology will use data collected by Sportradar, which runs its U.S. operational HQ out of Minneapolis, to spice up online sports articles.
By Amanda Ostuni
February 02, 2019

Per the deal, Sportradar, which is based in Switzerland but runs its U.S. operations out of Minneapolis, will plug its sports data into New York City-based Arkadium’s interactive AI product, InHabit. InHabit’s patent-pending technology is capable of reading raw text of sports articles and then automatically inserting relevant Sportradar statistics to create interactive data visuals to accompany the story.

InHabit claims its technology is capable of increasing reader interaction, retention, and time-on-the-page duration. Publications that took advantage of their new offering, according to a Sportradar, saw session durations double and click-through rates increase by up to 35 percent. Which in turn can improve advertising, sponsorship and other monetization opportunities available to a sports site.

“Our partnership represents the future of sports marketing,” says Kenny Rosenblatt, president and co-Founder of Arkadium, “one where fans are deeply engaging with the players and teams they love, while providing publishers and advertisers the time, attention and relevant audiences that they’re looking for.”

InHabit already reaches 70 million sports fans through partnerships with USA Today Sports Media Group, SLAM, the Associated Press, FanSided, and dozens of other US-based publishers. Through the partnership with Sportradar, its reach will now, for the first time, expand to media in other countries.

The agreement involves creating editorial data points, or “factives,” for InHabit to pull for English Premier League matches and UEFA Championship League matches in multiple languages, plus games under the NBA, NFL, MLB and NCAA football and basketball.

“The way in which sports fans are consuming content has dramatically changed and fans are looking for more interactive, visual stories to help keep them informed of the latest sports news,” says Jonathan Earle, Sportradar’s customer director of Sports Media. “Partnering with Arkadium will help us to lead the next generation of sports engagement.”

In addition to serving fans and the media, the AI is expected to serve sports gamblers, too – a market Sportradar has been involved with through partnerships with gambling operations overseas. 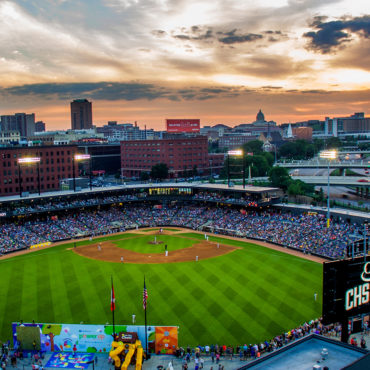