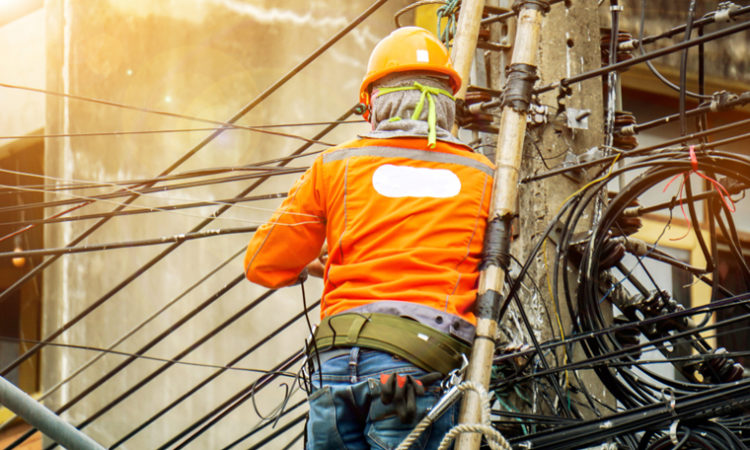 A group of DFL and Republican lawmakers are pushing to narrow the broadband gap by injecting $70 million over the next two years into a grant program for internet projects.

Speedy Internet for All Minnesotans? Not Even the Most Ambitious Bill Will Make It Happen

A bipartisan group of lawmakers is pushing to allocate $70 million for internet projects. But even that funding would only go so far toward the state’s ultimate goal — to bring much faster universal internet to everyone in Minnesota by 2016.
By Walker Orenstein
January 16, 2019

While cities and towns in Koochiching County might have fast and reliable internet service, large parts of the northern Minnesota region currently have no good options. Paul Nevanen, director of the county’s Economic Development Authority, says that translates to headaches for the area’s economy.

Just miles from International Falls, where broadband access has attracted a significant data storage business, Nevanen said resorts and recreation outfits that rely on tourism to Rainy Lake and Voyageurs National Park have struggled to cope with poor internet connections.

“We’ve got resorts that have their systems connected to the internet and can’t process credit cards at certain times because they don’t have the capacity,” Nevanen said.

There is no shortage of stories across Minnesota like the ones in Koochiching County, where uneven access to high-speed internet, sometimes called broadband, persists despite a decade of study and more than $85 million in state spending (plus more in local, federal and private money) since 2014.

Now a group of DFL and Republican lawmakers are pushing to narrow that broadband gap by injecting $70 million over the next two years into a grant program for internet projects. But while the new money would keep Minnesota on track to meet one of its broadband access goals by 2022, the state has a long and expensive road ahead to reach a more ambitious pledge — to bring much faster universal internet to the state by 2026, said Danna MacKenzie, executive director of the state’s Office of Broadband Development.

“We absolutely will be celebrating that we’ve done something that I don’t think too many other states have done,” MacKenzie said about the prospect of reaching the state’s 2022 goal. “But at the same time, no, we aren’t necessarily done yet.”

The biggest obstacle to high-speed internet outside of large cities has always been money. In remote areas, it’s expensive to build infrastructure, and there are fewer potential customers to offset the costs.

Justin Forde, the senior director of government relations for Midco, a Midwestern telecom company, said there can be a “tremendous” price tag for running wireline internet services, such as fiber-based broadband or digital subscriber lines (DSL), to rural houses and businesses.

“It’s tough to do that with only private capital because the return isn’t there for some of these last-reach spots,” he said.

To prompt internet companies to expand, governments have stepped in. The 2009 economic stimulus package championed by former president Barack Obama had $7.2 billion for broadband grants and loans across the country, while Minnesota has had a task force on broadband since 2008 along with its grant program spending.

Jim Boyd, executive director of the Cook County Chamber of Commerce, said his county is a success story. Arrowhead Electric Cooperative offers blazing speeds to much of the area after developing a fiber network with the help of $16 million in stimulus money. Roughly 95 percent of the county now has access to internet with speeds of at least 100 Mbps/20 Mbps.

That internet speed is Minnesota’s goal for all residents by 2026. So far, 74 percent of the state — and 59 percent of rural areas — have access to that speed, though that’s up from the 39 percent of residents (41 percent in rural areas) that had it in 2015.

Percent of households served by 100mbps down/20mbps up broadband, 2018 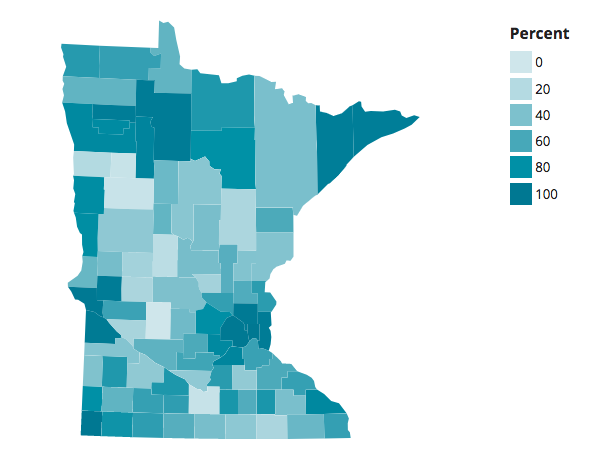 A long way to go

While those numbers represent improvement, they also show far the state has to go, especially since those last pockets of the state without high-speed internet are typically the most difficult to bring broadband to, said Judy Erickson, a spokeswoman for the Minnesota Rural Broadband Coalition.

MacKenzie, the state’s broadband office director, said that $70 million is based on a recommendation from the broadband task force aimed at keeping the state on track to meet its 2022 goal of 25/3 speeds.

Percent of households served by 25mbps down/3mbps up broadband, 2018 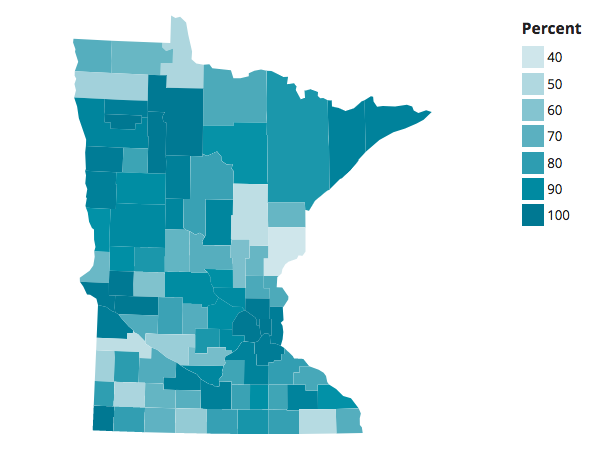 MacKenzie said there isn’t an estimate for how much it will cost to reach the 2026 goal for now, partially because it’s difficult to forecast what will happen with federal and private dollars in the future. But she stressed that the state will not be finished working on broadband once it reaches the lower speeds of the 2022 goal.

“I want to be a little bit careful about not establishing the expectation that 2022 is a hard stop and we’re done,” MacKenzie said. “And I know that a lot of people are anxious to find that ‘when do we get to say we’re done’ and, and to be frank, we live in a world that’s constantly changing and it’s not clear when we’re going to be done. But we are making what I think is significant progress.”

Erickson said one reason her organization is not pushing for more money now is to preempt the notion that lawmakers can approve one big chunk of cash and call the job done. The broadband bill would also build that same $70 million into future budgets, which Erickson said is critically important to consistently build broadband infrastructure. The money for the grant program has generally been approved in one-time allotments.

Despite the price tag of the broadband bill, Erickson said she believes there is political will to pass it. DFLers in control of the House introduced the measure as one of their first 10 bills of the year, signaling its place as a top priority. At least some Republicans in the House and Senate have supported it, too. Plus, both parties have largely backed spending on rural broadband in the past.

Telecom companies don’t appear to be a big hurdle either early in the legislative session. Forde said Midco generally supports the state’s broadband grant program. Representatives for Frontier and CenturyLink, two companies that provide internet service in Greater Minnesota, did not respond to requests for comment.

But the state’s approach to broadband hasn’t been without controversy. Some in the GOP have complained about the state’s preference for fiber-optic cable, which is reliable but pricey. Rep. Pat Garofalo, R-Farmington, has argued for more reliance on cheaper options, such as internet by satellite or what’s known as fixed wireless, where homes get service from a signal placed high on a nearby building, like a water tower.

Telecom businesses have also bristled at some new broadband projects in areas where private companies already offer some form of internet, saying focus should be on unserved communities. The Freedom Foundation of Minnesota, a conservative think tank, has argued against government-owned broadband in any form, saying it reduces competition and innovation and is a risk to taxpayers. The foundation cites, among other stories, the financial collapse of Lake County-owned broadband service known as Lake Connections.

For now, Ecklund said the fight at the Legislature will likely be about how much money to give the broadband program. But he said the slow internet service hits close to home, affecting his neighbors, local businesses and even his own house: Rob and his wife, Joan, cannot each have a laptop on the internet at the same time “because neither one of us will get service. In a nutshell, that’s why I’m pushing it.”