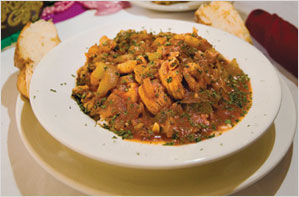 Family favorites -and stories- from a Louisiana native.
November 11, 2006

Her father was an iceman in Lafayette, her mother a domestic, and everyone picked cotton to help with expenses. When Deverges-Ruona was in her late teens, she was hired by a wealthy woman to go to New York and care for some poodles. That led to a part-time job as a waitress and cook, meeting the man she eventually married, and a relocation to the Twin Cities with him, where she’s worked in assorted restaurants.

That was all years ago. Then, last summer, when the former site of the Sri Lanka Curry House and Taj Mahal restaurants came on the market, Deverges-Ruona decided she would finally start “living her passion” full time as a restaurateur. It hasn’t been easy. Between the weak economy, turn-over in the front and back of the house, and almost a complete lack of publicity, her first year at Antoine’s has been what all entrepreneurs know intimately: a struggle.

Favorable word of mouth ought to raise the restaurant’s low profile. While diners’ biggest complaint seems to be slow service, that’s largely a function of the homemade quality of every dish that comes from the kitchen. For those who love Creole cuisine, a bit of patience is well rewarded.

The menu is a composite of New Orleans classics—catfish fingers, fried chicken, po’ boys, jambalaya, gumbo, and beignets. And many of the dishes have an interesting story. Take, for example, the “Blue Monday” red beans and rice and andouille sausage. Turns out Monday was cleaning day, and what made the chores bearable was the prospect of a heaping serving of this favorite supper.

If you’ve got time, order yourself a mimosa or a hurricane, and just maybe you’ll have the pleasure of meeting the chef and hearing more about her food and fascinating life.

A sampling from the menu

Louisiana Filet Gumbo with Smoked Sausage, Baby Shrimp, and Chicken $13.99
When momma started to make a roux, you prayed it was to make gumbo. A flavorful, smooth, rich soup served over steamed white rice. Served with French bread to sop up the gumbo.