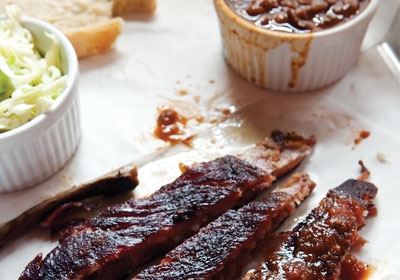 Despite his easy Southern charm, the man behind the counter at Bayport BBQ is a native Minnesotan. Chris Johnson is owner, pitmaster, baker, impresario (he books live blues several nights a week), and the guy who comes to your table to make sure you like the cut of the brisket.

Johnson fell for Texas barbecue during sojourns in Austin, where he went to soak up the blues. After a career in insurance and financial services, he founded and ran the Twin Cities’ Deep Blues Festival for several years. When he passed that torch to others last year, the Bayport Cookery in the St. Croix River town of Bayport had been standing empty for a while, and Johnson, who’d earned his way through school as a baker and hosted community barbecue events, decided it was time to bring another taste of Texas to Minnesota.

Texas barbecue is all about the smoke, and Johnson uses local oak in an all-wood pit. Meats—smoked turkey, pulled chicken, hot links, ribs, and brisket sliced lace thin—are served dry, with sauce on the side. And even the sauce starts with smoked tomatoes and onions.

“We create that smoked flavor right from the beginning,” Johnson says, “not by adding chemicals. Some people use the sauce, some don’t. But we want the meat to stand alone.”

Where Johnson doesn’t bow to Texas tradition is with his bread. Wonder bread is a fixture on any barbecue joint’s counter, there just to sop up the juice. But Johnson rises with the sun to bake from 30 to 70 loaves of fresh bread a day. Rich, golden, dense, and sliced thick, it looks right at home on a square of waxed paper, nestled between the brisket, jalapenos, and baked beans.