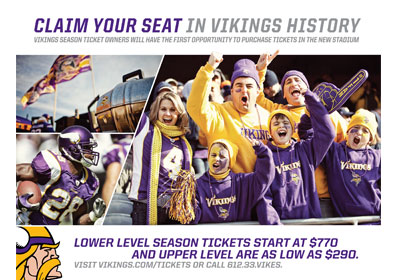 The Vikings still have two more seasons in the Metrodome. How will they ever sell tickets?
October 01, 2012

It seemed fourth and long for the Minnesota Vikings to work a stadium bill through the 2012 Legislature. But maybe we underestimated the power of TV ratings. Nice Nielsen numbers are a double-edged sword, though: The Vikes need to get fans out of their La-Z-Boys and into hard plastic Metrodome seats.

“Tech is a kind of monster for us,” says Dannon Hulskotter, director of marketing and business development for the Vikings, because it has “provided an unbelievable viewing experience at home. Many teams are challenged to get people off the couch and away from the 55-inch flat-screen and the comfy confines of their own home and cheaper beer and pop in the fridge. We’re trying to remind fans how much fun it is to come to a live game and be part of the loudest crowd in the NFL.”

The loud crowd is the centerpiece of the Vikings marketing efforts. “Show Your Horns” remains the tagline, but there’s a difference: Most ads remind fans that season ticket holders will have the first opportunity to buy tickets for the new stadium when it opens in 2016.

But the team realizes they can’t just sell the future. Accordingly, defensive star Jared Allen and running back Adrian Peterson will be featured prominently. In one spot, Peterson proclaims “My determination, my ambition: These are my horns.” But some of the ads will also feature icon Bud Grant, who coached the team to four Super Bowls. Sound like last year’s ads? Well, that’s by design, said Hulskotter. “We’re trying to remind our fans that the Vikings are part of the fabric of the Upper Midwest,” he says, adding, “We felt we really captured that last year, but what was really missing was our current guys.”

What was also missing were some tackles and passes, and the resulting 3-13 season will make it challenging to energize fans for this year. So the heritage helps.

Sports fans who view the spot repeatedly during local games or newscasts may be fooled, but its ubiquity isn’t reflected in investment, which is well below $1 million. Beyond the TV and radio spots, direct mail will be used extensively. But of course, the most effective advertising is still the Sunday-night highlights or Monday paper announcing a surprisingly solid start. There’s expected to be plenty of room for a trophy case in the new stadium.