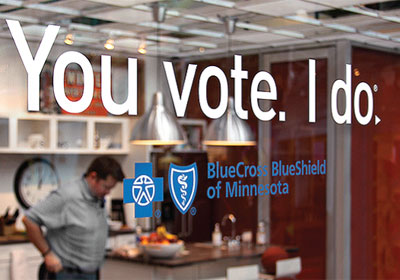 Based on an outsized idea about slimming down, a diminutive Minneapolis-based agency, mono, is now nationally known for its clever ideas. This 60-person, independently owned agency with 2011 billings of $65 million, won the 2011 O’Toole Award for creative excellence.

THE CREATIVE
The jury of creative peers singled out mono’s “Human Doing” campaign for Blue Cross and Blue Shield of Minnesota, which had been running a commercial about a man dancing in a doctor’s waiting room. But mono wanted to move beyond the spot and was spot-on with a decision to put a man in a glass apartment at the Mall of America. Responding to a month of social media requests to do simple exercises and eat more sensibly, “Scott” lost 29 pounds, lowered his body mass index from 37 to 32 and shed 110 points from his total cholesterol.