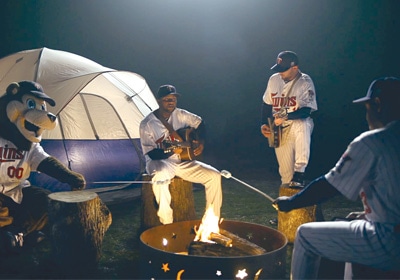 Aiming to avoid a sophomore slump after a stellar rookie season at Target Field, the Minnesota Twins make a shift to re-emphasize the players in this year’s edition of the enduring, and endearing, “Twins Territory” campaign.

One of baseball’s marketing advantages: The players are seen, nearly every day for half a year, unlike the remote warriors under football and hockey helmets.

But if the same players are always featured, an ad campaign can go stale. Minneapolis advertising agency Periscope cast rising stars Jason Kubel and Dernard Span, and coach Jerry White, (instead of Joe Mauer and Justin Morneau) in this season’s first ad, “Snipe Hunting,” which puts the outfielders in the great outdoors. They’re joined by last year’s popular rookie, Danny Valencia, as a greenhorn camper sent on a Minnesota version of a wild goose chase—a snipe hunt—to the snickers of Twins vets. The clever creative instantly works. Viewers intuitively get the rookie hazing, be it around dugouts or tents.

Periscope has worked for the Twins since 2004. It’s running the campaign statewide with heavy play on Fox Sports North, but most of the multimedia effort (newspapers, radio, TV, online) is in the Twin Cities. And in a rare baseball trade that saves the team money, the Twins can leverage game tickets for media space.