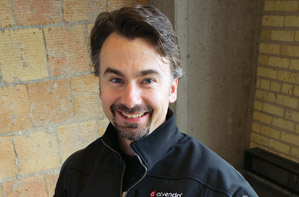 Sure, online shopping is easy: A click here, a click there, and you’re done. But if it were just a little more simple, how much more might you spend?

Wade Gerten, founder and CEO of Minneapolis-based Alvenda, asserts that customers will shop 10 to 20 times more often if they don’t need to leave the site where a retailer’s ad appears. StoreCast, the technology developed by the two-year-old Alvenda, lets people shop from inside banner ads, news sites, even Facebook status updates—without having to be routed to the seller’s Web site. It places a “mini-shop” in the site being visited by prospective shoppers, allowing them to buy then and there.

The genesis of Alvenda (pidgin Latin for “everybody sells”) dates back to a wall Gerten hit in 2007 after he left Oracle, which had bought his previous employer, Minneapolis-based retail software maker Retek. He started his post-Oracle work developing e-commerce applications.

One of his projects was a Web site to sell apparel from multiple retailers—visitors could make their purchases at one checkout. But he found the only way to generate any sales was to send all his traffic to each individual retailer’s site. “I was trying to allow the checkout to happen on my [own] site,” Gerten recalls. “I thought it was kind of weird that that capability didn’t exist.”

Gerten soon contacted Brian Howe, who oversaw marketing for Target.com. “I said to Brian, ‘If we made it so your customers could shop anywhere they hang out on the Web, would you pay me a commission on all those sales?’” Gerten says. “His answer was, ‘Why don’t I just quit, and we’ll do this together?’” Also joining the new venture was Lou Abramowski, a senior Web developer at the Lacek Group, a Minneapolis-based loyalty-marketing firm. Alvenda now employs nearly 50 people.

Alvenda has a small but high-profile roster of clients, including 1-800-Flowers, Brooks Brothers, Hallmark, and Avon’s Mark division. Each night, Alvenda imports product catalog data from each of its clients. StoreCast’s portable “shopping cart” then makes itself available wherever it’s needed: If you make a purchase from Hallmark’s fan page on Face- book, you type in your shipping and billing information. Alvenda passes that data to Hallmark, which then processes the order as if it were placed via its own e-store. “In that scenario, Hallmark is the merchant of record,” Gerten says. “They charge your credit card and fulfill the order.”

Alvenda, which isn’t yet profitable, makes its money three ways: an up-front fee for designing client “stores,” transaction commissions, and monthly subscription fees for retailers to use the StoreCast platform.

Alvenda can track traditional e-commerce metrics, and also less conventional ones—for instance, how widely customers share merchant offers with, say, their Facebook friends. “We found that many of Mark’s customers have Facebook profiles,” Gerten says. “So we gave them a tool that lets their customers push offers to their friends. In your [Facebook] news feed, you get an offer from your friends who are Mark customers, and you can buy makeup and check out from inside the news feed.”

Alvenda now plans to expand its platform, which could include moving into markets such as travel booking and magazine subscriptions.