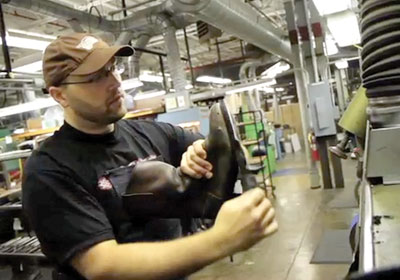 Here’s a marketing trend to keep an eye on.

“Online video is about to explode on the marketing space,” asserts Michelle Fitzgerald, who runs Minneapolis marketing agency Brew. Fitzgerald can point to her own work as evidence. In February, the first of four Brew-produced online videos premiered on Red Wing Shoe Company’s Web site.

The first video, titled “The Factory,” gives viewers a nearly three-minute “tour” of Red Wing’s production facility in the company’s eponymous hometown in southeastern Minnesota. Succeeding videos, all accessible via Red Wing’s Web site, portray employees in the company’s tannery and boot repair shop, showing them at work and “listening” to them discuss some of the niceties of their craft.

Who’d want to watch this kind of stuff? A lot of people, it turns out. Since Brew and Red Wing launched the videos—driving traffic primarily through Red Wing’s Facebook page and other social media—they’ve been viewed more than 100,000 times (as of late April). The shoe-repair video was featured on tech-geek Web site Gizmodo; the hipster-oriented portal Devour has included the videos among its selections.

These aren’t huge numbers compared to the millions of views a hot viral video can garner. But for Red Wing, the videos are viral enough. According to Fitzgerald, the response rate on Facebook posts related to the video increased 48 percent relative to other posts. Web site traffic increased on average nearly 45 percent year over year during the days on which the videos were posted. And the videos increased Web site engagement by about 2 minutes and 30 seconds, about the length of each video.

While Brew has also developed traditional TV, radio, and outdoor ads for Red Wing since becoming the company’s agency of record last fall, the online component is the most direct and engaging aspect of its current marketing campaign, which Brew built around the tagline it created, “Work is Our Work.”

Though Red Wing itself came up with the idea for online videos about its company and its work, it was up to Brew to produce them. “We wanted to tell the story of the Red Wing brand—an authentic, all-American brand,” Fitzgerald says.

Brew certainly has the chops to tell it. Before cofounding the “boutique creative company” in 2006, Fitzgerald worked on several online video projects while at Fallon during the late ’90s and early ’00s. Those included the groundbreaking BMW Films, a series of online movies (starring British actor Clive Owen) designed to engage potential customers more effectively than traditional marketing messages.

Some companies reading this might be thinking: Hey, who needs Clive Owen—or even a production company? These days, all you need is a smart phone! Not so fast, Spielberg. Fitzgerald notes that to create 10 minutes of Red Wing video, her crew had to shoot hours of footage.

“You have to be able to tell a good story in two or three minutes,” says Lori Fink Garelick, owner of Minneapolis-based Lori Fink Productions and a former executive producer for WCCO-TV and the nationally syndicated TV show Rebecca’s Garden (which ended in 2007). Garelick has found her online video business—whose clients include restaurants and manufacturers, among others—has been booming in the past two years. On line, “people don’t want to read as much anymore,” she observes. “They want a quick visual of what they’re looking for.”

With her long experience in TV production, Garelick knows that to have a successful video, you have to get people “to talk in quick short sound bites, which is not how people talk.” Yet the people you’re interviewing have to “sound natural.” Getting those sound bites and “pacing the story with music or ambient sound” doesn’t come naturally even to the most tech-savvy of interns. A video has to look “comfortable and organic,” notes local social media maven Jennifer Kane, but if it looks sloppy, people will ignore it at best, flame it at worst. Finding a balance between believable directness and a professional presentation is what Kane calls “calculated authenticity.”

Given its long history, small-city location, and legacy shoe and boot designs, Red Wing would seem to have the authenticity thing nailed down. But the company’s reputation in that regard suffered some bruises when word got out that many of its products were actually being made in China. (The company says that less than 40 percent of Red Wing footwear is currently being produced offshore.) The videos, all shot in Minnesota, could help Red Wing repair some of those dings and tears.

It’s the right moment to hammer on the authentic. Various recent studies have noted that more and more people are looking for products that convey a certain old-school durability. This trend is a global one: Some of Red Wing’s biggest fans are in Japan and Europe, where its white-soled work boots have long had an All-American chic. After some recessionary doldrums, Red Wing is hiring again, beefing up U.S. production, and reaching a new, online-oriented generation of customers.

“Video allows us to capture the genuineness of our people,” says Peter Engel, Red Wing’s director of marketing communications. “The authentic nature of our brand has a lot of appeal to young buyers.”