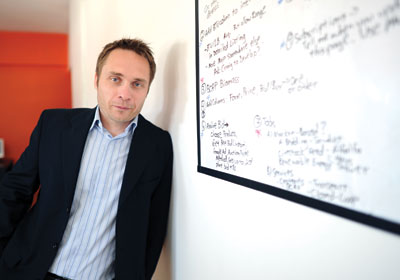 Meier believes that there is a significant gap in data backup offerings for small businesses, one that large online backup firms like Carbonite and Mozy weren’t filling. “The people we talked to were sole proprietors, micro-entrepreneurs, and they didn’t have the time” to properly protect their data, Meier says.

Digital Brigade already had a data protection service, but it was priced beyond what most smaller firms could pay. Minbu was created to offer a scaled-down, idiot-proof version of that service to small companies.

Once a client signs up for Minbu’s protection, which starts at $15 per month, it’s sent an application to be installed on its computer. The customer’s data then is compressed and encrypted, then sent to Minbu. Throughout the process, the only person with the encryption key is the customer. From there, the data are sent to Minbu’s 32 terabytes’ worth of servers via a secure Internet connection. After a big initial backup, Minbu backs up only what’s changed, down to the byte level.

Minbu client Adam Johnston, co-owner of Bloomington-based short-run digital printing firm Matreks, notes that his company has to keep safe numerous logos, photographs, and other elements. “The really neat thing about Minbu is that we have a local backup as well as an online backup on their server,” he says.

While Digital Brigade has been profitable throughout its history, Minbu is still getting up to speed. It has a few hundred customers now; Meier has an eye on 10,000 clients by 2013, partly with the help of a partner program designed to enlist IT professionals to spread the word.

“When someone signs with Minbu, we might not make much in year one, but in year two our margins are great because the technology is paid for and running,” Meier says. “It’s definitely a volume-based business.”