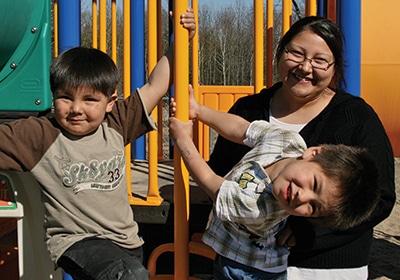 The Blandin Foundation funds efforts to build the rural economy and strengthen the social fabric of small communities.
December 01, 2015

Grants awarded since founding
About 8,000

Value of grants since founding
$365 million

Foundation focus
Strengthening rural Minnesota communities through grantmaking, community leadership training and public policy and engagement. Recent investments have supported broadband access and use, early childhood education and economic vitality and inclusion.
+
At least 60 percent of the Blandin Foundation grants are awarded in Itasca County and the surrounding area; the remainder are awarded in other rural areas in Minnesota.

The Blandin Foundation’s work is as a catalyst of connections—among members of rural communities and between the education and business sectors. The foundation weaves together economic development, education, community leadership training and other strategies to expand opportunities for all rural residents. Increasingly, Blandin’s activities support a more diverse rural Minnesota that includes many immigrants who are altering the racial and ethnic makeups of small communities.

In 2016, the Grand Rapids-based Blandin Foundation will mark its 75th anniversary. Charles K. Blandin was a Wisconsin native born into poverty; he became an entrepreneur in his teens. In the early 1900s, he became publisher of the St. Paul Pioneer Press and later its owner. In 1916, he bought a newsprint paper plant in Grand Rapids, which would become Blandin Paper Co. He sold the newspaper in 1927, and shifted his mill’s production to coated paper.

Blandin started the foundation in 1941. Nearly 20 years after his death in 1958, his trust sold the plant. Today it is owned by Finnish pulp, paper and timber company UPM-Kymmene.

The Blandin Foundation’s endowment was $391 million as of Sept. 30. Based on comparative asset data, it was ranked as the ninth-largest foundation or corporate grantmaker in Minnesota. The rankings were released this year by the Minnesota Council on Foundations.

From the beginning, the Blandin Foundation has focused on rural communities. It uses a variety of approaches in its work: grantmaking, leadership development programs, community engagement and strategic communications. While economic betterment is one of its goals, its work needs to be “charitable in nature,” says Wade Fauth, the foundation’s vice president. “For us, it’s not just about jobs,” Fauth says. “It’s really about expanding opportunity, particularly for populations that haven’t necessarily done very well.”

From Blandin’s perspective, education and workforce development are boosted by community empowerment. Twenty-nine years ago, the foundation launched a community leadership development program. Communities that wish to participate apply to the foundation, which then helps convene a group of 24 to 26 leaders. This cohort typically includes established and emerging leaders from the business, religious, education, political and social services sectors. In some cases, two or more communities create a blended cohort. Once gathered, the group spends a week together in a retreat-type of environment for leadership sessions. They also attend three one-day, follow-up sessions.

If the community leaders develop a project they would like to pursue in their hometown, Blandin may jump-start that effort with a grant of up to $5,000. Some of the projects that community leaders have pursued after the retreat include research to start a new school, strategies for recruiting volunteers to mentor business owners, and working with a facilitator to create a community vision.

“One thing I’m seeing in our leadership programs is a growing diversity of voices” among participants, says Kathy Annette, president and CEO of the Blandin Foundation. “You hear about the economic needs of all sectors in the community,” including different races and cultures that are emerging in rural communities. Somali and Hispanic immigrants in southern Minnesota, for instance, mean that “very different dynamics have evolved in these communities,” Annette says. “The leadership skills that are needed are constantly evolving.”

That means, among other things, increasing education and employment opportunities “for people who haven’t necessarily done so well in the past,” Fauth says, including low-income people, racial minorities and people with disabilities. Grants for education programs are a particular focus. Blandin has committed $20 million for early childhood education over the next 10 years, building on a similar investment that began 10 years ago.

Blandin awards $1.5 million in Itasca County area communities each year for postsecondary, need-based scholarships. In addition, it provides funding to organizations building connections between higher education and business. One of Blandin’s longest funding relationships is with the engineering program at Itasca Community College (ICC) in Grand Rapids. ICC students are going on to four-year programs and completing their bachelor’s degrees at “almost double the rate of students who walk in the door at a four-year engineering program,” Fauth says. Part of the reason: ICC students work on engineering projects with area companies under the college’s supervision, a fruitful connection between businesses and the college.

Meanwhile, one of the biggest connections that Blandin is seeking to help build is between communities and the digital future.

In 2003, when the foundation began work to expand broadband access to rural Minnesota, there was skepticism among some of Blandin’s rural constituencies. “Now the question is, ‘How can we get it? We need it,’ ” says Bernadine Joselyn, Blandin’s director of public policy and engagement, who has been spearheading the foundation’s broadband advocacy work.

Blandin’s participation in broadband expansion involves supporting communities as they determine what they want broadband to do, and then connecting them to resources that include technical support, information and grants. It’s clear that rural Minnesotans want broadband. But what is it they want, exactly? Joselyn notes that there’s been a great deal of discussion on the definition of broadband, with no uniform agreement on speed and capacity.

Broadband access also gives rural manufacturers and other businesses the ability to sell their goods to a wider geographical market. An online presence and the capacity to perform transactions electronically can help attract new business from beyond a company’s traditional market. Small manufacturers have been discovered online by companies that are seeking just the products they make.

Yet access is a complicated issue, Joselyn says, and Blandin is “not the broadband foundation.” Instead, as it does with its leadership program, the foundation supports a broad range of communities by providing information, facilitating networking and funding grants. But the communities themselves “own the projects,” she says.

There’s one thing that many communities want to avoid: starting their own municipal broadband services. Though some communities, such as Lake County in northeastern Minnesota, have pursued this option, Joselyn says that local governments view providing broadband as “a last desperate step.” Instead, several communities have been surveying local interest in broadband to determine demand, with the goal of showing an existing provider that there’s a business opportunity in their town.

One solution that Blandin and some communities are exploring is establishing broadband cooperatives. In Grand Rapids, telephone cooperative Paul Bunyan Communications offers a broadband network that provides fiber-optic technology to the home.

In some cases co-ops might be in the best position to provide broadband for their communities. As Joselyn notes, these entities are invested in the success of the areas they serve. What’s more, co-ops can apply to the federal government for financial incentives and other assistance that “just aren’t available for for-profit companies,” Joselyn says.

Whatever types of entities help fill in the gaps in broadband coverage, the Blandin Foundation considers that crucial. “Without broadband, communities will not continue to thrive,” Joselyn says. “It’s absolutely critical for youth retention, business attraction, quality of life. It’s hard work, and rural leaders have to do it themselves. We’re here to stand with them and help connect them to resources and ideas and hopes and dreams to make sure that their communities continue to be prosperous and vibrant.”

One community that the foundation is working with is the Fond du Lac Band of Lake Superior Chippewa, whose reservation is south of Duluth. “The band, myself included, is of the opinion that the difference between today’s haves and have-nots is Internet-based,” says Fred Underwood, the band’s IT director. For residents of the Fond du Lac reservation, reliable and affordable Internet service means access to higher education, health care and economic opportunity. With the help of a foundation grant, the band installed 13 public access Wi-Fi hotspots on central buildings in the community.

Blandin, Underwood adds, also has been helping the community organize its efforts to get broadband. The Fond du Lac community has been studying the feasibility of different types of connectivity. With the foundation’s guidance, it secured a federal grant to extend fiber to homes on the reservation. Underwood has seen more community members starting online businesses, including those involved in selling maple syrup, wild rice and traditional Ojibwe crafts. But most of these businesses can’t access the Internet in their own residences to check orders and update their websites. Fiber to their homes, Underwood says, could be “the great equalizer.”

Kathy Annette, the Blandin Foundation president and CEO, has heard from numerous businesspeople who’d love to set up shop in rural areas. She quotes one Twin Cities-area entrepreneur who grew up around Grand Rapids, and said, “If I had access to broadband, I’d start my business here.”

People are attracted to the safety of the area, the proximity to outdoor activities and the lack of highway gridlock. But for many businesses, a robust digital presence is essential.

Those businesses that already call rural Minnesota home participate in distinctive economic activities. The natural resources economy of northeastern Minnesota has been experiencing some difficulty recently, both in the iron mines and in the timber industry. But Duluth and the North Shore continue to build upon a strong outdoors economy, which includes tourism and outdoor-gear production. Meanwhile, northwestern Minnesota retains a strong base of manufacturers.

“There’s a lot going on in rural Minnesota,” foundation vice president Wade Fauth says. “People are engaged. We have great leaders out here.” In fact, “rural and urban residents need each other in this state,” Fauth says. “Disinvestment in rural areas is a disservice to all of us.” Access to broadband and educational opportunities are essential “to keep the innovation pipeline going.” What the Blandin Foundation hopes to help maintain is what Fauth calls the “rural advantage.” In rural Minnesota, “people do know each other. They can get together and create change.”