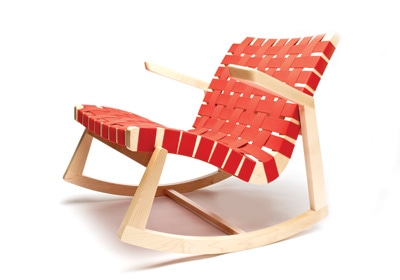 Architect Ralph Rapson passed away in 2008, and many of his Twin Cities buildings—notably the old Guthrie Theater—preceded him in death. But this year, Rapson’s son and a business partner are collaborating to resurrect some of the modernist master’s furniture designs. They believe Rapson’s time has come around again.

“He was a modernist, but he had this romantic quality,” says Chris Reedy, an IT company marketing consultant turned furniture entrepreneur. Reedy resides in a 1964 Rapson-designed house in Falcon Heights’ University Grove neighborhood, an astonishing pocket of mostly modernist houses tucked away next to the University of Minnesota’s St. Paul campus. Reedy’s Rapson pad is now where he works for Rapson-Inc., which recalls the name of a small retail store Rapson operated briefly in Boston in the 1950s.

Reedy cofounded Rapson-Inc. (v.2) with Toby Rapson, who followed his father into architecture. The two met in 2006 and bonded over their love of midcentury modernism. They also saw a market opportunity.

While Minneapolis furniture maker Blu Dot was selling a chair based on a Rapson design, no others were being made. (Indeed, most of Rapson’s furniture designs existed as only prototypes or sketches.)

The new Rapson-Inc. chairs are made in the United States, which is great for the brand. It also means these chairs aren’t cheap. Most sell in the neighborhood of $2,000—not gated-community pricing, but perhaps the furniture equivalent of University Grove. The principals say most buyers so far are architects and designers, as well as “stylish moms” who dig Rapson’s Rapid Rocker as a way to lull their babies. The line includes outdoor versions that Duluth-based Loll Designs produce from recycled plastic.

Online furniture purveyor YLiving sells the Rapson chairs, which are also sold in higher-end design stores in San Francisco, New York, and elsewhere. Locally, Danish Teak Classics in Minneapolis is selling some. The line gained ink this summer in New York and Los Angeles, but the partners aren’t letting the attention rock their foundations.

“We’re a little Minnesota company,” Toby Rapson says, “and we want to keep it that way.”