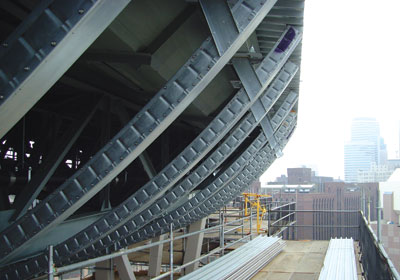 Radius Track Makes It Easy on the Curves

For building construction firms, bending steel frames for curved ceilings and walls is a slow job, and therefore expensive. A 10-foot steel arc, which has incremental curves in its metal, might take 10 to 15 minutes to make.

General contractor Chuck Mears knew that too well. Frustrated by the time taken in the standard process of bending metal, called cutting and strapping, he tinkered with a new approach. Mears invented a tool called a track bender, which curves the metal by creating compound indentations at consistent intervals along the length of the material. The track bender allows a worker to bend 10 feet of steel in one minute.

The bender became the basis of his privately held company, Coon Rapids–based Radius Track, which he founded in 1996. Since then, he has sold thousands of track benders to other contractors for $4,000 to $5,000 each, an amount he estimates that customers make back within a week to 10 days. Since its founding, the firm has supplied curved components to more than 6,000 buildings; its track benders have been used on perhaps another 100,000. The company has 20 employees and generates a little less than $20 million in annual sales.

Radius Track has provided ready-made steel curves for building projects that include the silver sunscreen atop the upper deck at Target Stadium (“there’s not a ripple in it,” Mears boasts); the Walt Disney Concert Hall in Los Angeles; the Salvador Dali Museum in St. Petersburg, Florida; and the Kauffman Center for the Performing Arts in Kansas City, Missouri. Radius Track has bent metal for church domes, sailboats, casinos, schools, courthouses, and concrete bridges.

In working on these projects, Radius Track has collaborated with a wide variety of architects and builders, but Mears notes that the company does a lot of work in particular with the firm of architect Frank Gehry, known worldwide for his undulating structures.

One of those projects was the Disney Concert Hall; another was the hall for New World Symphony, a teaching symphony in Miami Beach under the direction of Michael Tilson Thomas. Gehry is friends with Thomas and agreed to do the concert hall, says Joaquin Riera, vice president of Lots-peich Company, a Miami firm involved in the concert hall’s construction.

Lotspeich has purchased tools from Radius Track, including the track bender; for this concert hall, however, the company had Radius Track do the bending. After submitting drawings and specifications, Riera says, “we got a kit of parts and a three-dimensional model with the parts and the model labeled in the same ways, so you can see how it all goes together. You follow the directions, which are all visual, and put it as it should go. Chuck makes it all fairly simple.” Radius Track, Riera adds, “is able to bend studs into very precise shapes. It’s no small feat.”

The building design community has taken notice of Mears’ work and the capabilities it has provided architects and builders. This spring, Mears was named a fellow of the American Institute of Architects. He is one of three Minnesota professionals to be so honored in 2012, and one of 59 AIA fellows in the state.