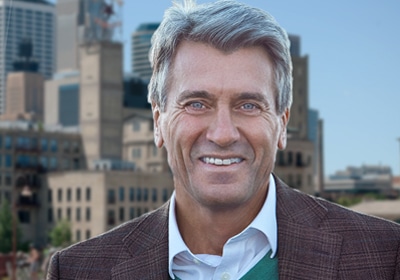 The former Minneapolis mayor previously worked with the organization during his time in office.
May 13, 2016

The Minneapolis Foundation announced Monday that former Minneapolis mayor R.T. Rybak would head the organization as its president and CEO.

Rybak will replace Sandra Vargas, the current Hennepin County administrator, who last October said she would retire from the position at the end of June. When Rybak officially takes over on July 1, he will be the seventh person to assume the president and CEO role in the organization’s 100-year history.

“It is a tremendous honor to be joining a true institution that has spent a century doing great things for my hometown,” Rybak said in a statement.

During his time in office, Rybak partnered with The Minneapolis Foundation on a community-wide effort to prevent youth violence. He also led the launch of STEP-UP, a summer jobs program that has employed 22,000 young people. At the end of his 12-year term as mayor, Rybak eventually became executive director of Generation Next, a public-private coalition aimed at closing the education gap for children of color.

The foundation cited Rybak’s history of community issue proactivity and connections within the city as crucial reasons behind his selection.

“While much is going well today, the disparities that exist in our community are unacceptable,” said Norm Rickeman, chair of The Minneapolis Foundation board of directors. “We can and must do better. We can only make progress if we all come together, and we’ve hired the best person to do just that.”

Nekima Levy-Pounds, who is vice chair of the organization’s board and also president of the Minneapolis chapter of the NAACP, gave her vote of approval for Rybak as well. “I am hopeful that the selection of R.T. will allow us to build off the progress we are making, and that it will lead to finding real solutions to the gaps that exist in our community,” she said.

During The Minneapolis Foundation’s centennial celebration last year, it distributed $80 million in grants throughout the city.