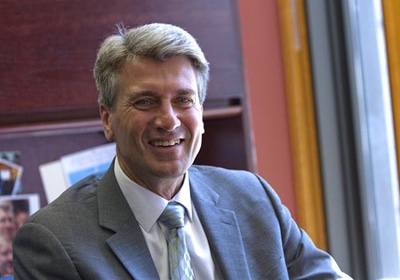 Q&A: R.T. Rybak On His New Gig At The Minneapolis Foundation

The former Minneapolis mayor plans to continue his work on eliminating the education gap and lead the foundation in tackling issues of housing, poverty and race.
May 15, 2016

Former Minneapolis Mayor R.T. Rybak was appointed this week as president and CEO of the Minneapolis Foundation, the 100-year-old community foundation which, last year, distributed $80 million in grants to help city residents.

He was one of 70 candidates who applied to replace Foundation CEO Sandra Vargas, who will retire in June.

Rybak, who was mayor of Minneapolis for 12 years until 2014, is now the executive director of Generation Next, a public-private partnership working to close the education gap.

Rybak is also a vice chair of the Democratic National Committee, and has been a frequent spokesman on party issues. He talked with MinnPost about his goals and plans for the foundation.

With your experience in civic matters and education, do you have a grand vision of what you'd like to do at the foundation?
The most important first step is to continue the kind of work Generation Next is doing: to map out what's happening with the education gap, understand it, and find whose role it is to fix. And over the past couple of years, I've worked with major foundations and have an understanding of the eco-system of philanthropy — working together for better results, working together to be a part of a solution to attack some of the deeper issues of income, housing and race. We need to get a common understanding of the problem and find a common way to solve it. This community doesn't lack compassion, it lacks alignment. So I will enter humbly, but impatiently, with a bias toward partnership.

Any specific plans? Ideas that you pitched to the board during interviews?
I said I would be most interested in continuing the work in education, but also moving forward on their strategic plan, which is all about closing gaps in the community. Much of our community is doing very well, and that makes it even more critical to focus on the places and people who can't be left behind.

You've surely had some offers from outside Minnesota. Why do you stay?
I've had opportunities but have never been tempted for a millisecond to live anywhere other than my hometown. People here are stuck with me. There's no other community with this level of civic infrastructure and this many people who truly care. We have problems that are serious, but solvable. I sometimes get concerned about where this world is going, but I'm confident that this community can tackle almost anything if we move in a common direction. I've been privileged to be an elected leader, but I think of myself as a civic person working on education, job growth, crime prevention and arts. I've crossed many boundaries and worked with lots of partners and learned you don't need to be a public official to do public work. And the best work hasn't been done by myself; you can't do it without partnerships.

Why this job with the Minneapolis Foundation?
I want to work on closing gaps for as long as it takes. Generation Next is very personal to me and I want to continue doing that, but also work on other parts of the issue. I want to be part of helping people in this community get more impact out of their desire to help. We should feel good about how much good we've done and be challenged by how much is left to do.

What's next for Generation Next?
I'm glad you asked. I'm confident it will keep moving without losing any momentum in the transition. We've made some staff realignments for day-to-day operations when I leave, and I will then continue to do regular meetings and strategic leadership until a new director is chosen. Then, I'll be on the executive committee, where I'll be a very active board member. I'll personally put significant effort into Generation Next and other education efforts.

You start the new job in July, still in the midst of the presidential campaign. Will this change anything with your DNC work?
My term at the DNC ends in July at the convention, which is convenient. I'll no longer be an officer of the DNC.

Does this mean you won't run for governor?
Not now, that's for sure. Maybe sometime later in life I'll do something more in politics, but I have no idea what. I don't rule out anything, but for the next number of years I'll be focused on continuing to build this foundation and get more results.

How did your stint as a newspaper reporter affect your work in politics and education, and, going forward, in the philanthropic world?
My journalism background has really helped; I learned to ask questions and it worked even better when I learned to shut up and listen. Being an active listener will be even more important as I walk into a new job in a community I know extremely well, but need to see from many different perspectives; especially from those who are not as privileged. I think the former journalist in me will dominate the former mayor in me, and I can get inside their shoes before trying to figure out the solution.

Do you miss being mayor?
When it's time to make a big pitch for the city, I miss it. When it's time for the budget, which I strangely came to love, I miss it. But I feel the work at Generation Next has been the most important work in my life, and this new job will be a continuation of it. I was blessed to be mayor and blessed to be moving on to more of that work.