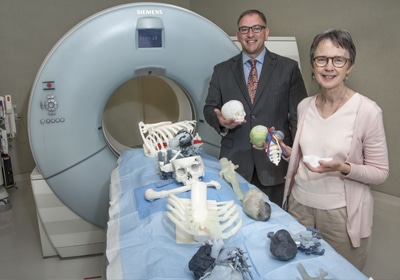 Q&A: How Mayo Is Integrating 3D Printing Into The Operating Room

In the medical industry, 3D printing isn’t limited to patching hearts and reconstructing lost or broken teeth. The emerging technology is revolutionizing the way surgeons tackle complicated operations, and the practice of simulating surgeries with anatomically correct, patient-specific models is becoming a tactic widely adopted by medical professionals at Mayo Clinic’s Rochester campus.

Dr. Jonathan “Jay” Morris, a diagnostic and interventional neuroradiologist, and Dr. Jane Matsumoto, a pediatric radiologist, head the organization’s burgeoning 3D printing lab. (They instead call it “the anatomical modeling lab.”) Now nearly a decade since the lab’s founding, the use of 3D printing for surgical practice at Mayo has grown to the point that every department has utilized it. Morris talked to TCB about why he believes the technology is creating a paradigm shift in how doctors prepare for the operation room, as well as trim medical costs and ease the patient’s mind before going under the scalpel.

About 8 years ago, we made some 3D models for the separation of twins conjoined at the liver and chest. What we quickly realized back then was the accurate representation of data taken from CT and MRI scans was incredibly important in the planning processes in these complex surgeries. In the set of the conjoined twins, there were five surgical disciplines, hundreds of people in the operating room, other medical people, pediatricians. Since that time, we’ve essentially migrated from doing things like conjoined twins—we did three sets of conjoined twins in the scope of three years—to spines because a spine surgeon saw some of the spines on the twins. So, we started doing complex scoliosis models, which we continue to do. And then from there we could basically migrate it out to every surgical specialty. The way our current lab is situated, we felt it was important to be inside the hospital and not a free-standing unit somewhere in a biomedical engineering building or away from the campus. I think making that decision early on helped us grow dramatically because we were able to meet with surgeons and physicians within the normal course of work. It continues to be the case as it was immediately discovered: The ability to visualize things life-size—what the surgeon is going to see when he enters the patient, how you put the patient on the table, approach the tumor—allows doctors to come away with a good plan that everybody understands. These simple decisions are discussed in a way that wasn’t possible before the ability to 3D print these models existed.

You hinted at 3D printing’s ability to build patient-specific models. Can you discuss the importance of this?

You know, we actually have anatomic models that were made on the Mayo campus in the early 1900s. What we’re doing instead of making models that are educational—which is one part of something we do—the majority of our work is making patient-specific models who are actually going to be operated on. So let’s say a patient comes in with a problem, like a skull-based tumor that has previously been operated on. Our surgeon has to make decisions about how he’s going to approach this tumor, which way the patient is going to be on the table, how much [of the tumor] can reliably be taken out without injuring the patient, what’s the real risk to the patient… Not only do they have to make all those decisions, they also have to communicate this to the patient. The first step is getting imaging, usually from a CT or MRI scan. But what’s happened over the past decade is the resolution of those scans has exponentially increased, allowing us to get really detailed, sub-millimeter, high-resolutions images of the tumor and the blood vessels which we then recreate in a 3D virtual object. It’s not a model of a skull-based tumor; it’s a model of this patient who is going to have this tumor resected. And it’s life-size and anatomically accurate, and surgeons can plan out a surgery, which reduces the invariability in the operating room—meaning where they going to cut—and we’ve been shown there are better outcomes as it makes the surgery safer and faster.

How do you use the 3D models to improve that doctor-to-patient communication?

Before surgeons even get to the point of operating, the 3D modeling allows for all those questions about the procedure to be simplified. So it allows for surgical planning, simulation, and also for education. The education part starts with the patient. If you were to have a complex tumor that we had to remove and I was trying to describe to you where this is in your body and what it looks like in this CT scan, I think it’s very difficult for patients to understand medical imaging. And I do this on a daily basis, so I know it’s difficult to explain and difficult to understand. But when you show the patient a model, I think the patient really understands for the first time what is going on. There’s no question the models give the patient a greater sense of confidence and trust.

Are the models you print true to feel?

I mean, you can print in different materials. One of the reasons we use Stratasys as one of our printers is they have the ability to print in multiple different colors and flexibilities.

How many 3D printers does Mayo own and operate?

We have multiple different print technologies and those are expanding over this year. 3D printing has a very broad umbrella, and there are different technologies to each printer that each has its own advantage. The advantage to some of the Stratasys printers is the number of materials you can print with, the multiple colors you can print with, the multiple flexibilities and its really fine resolution. We use PolyJet technology that they bought a few years back from an Israeli company called Objet. So we have Objet printers here—we just put in an Objet 500 at the end of 2015. We have a lot of different printers, but the downside of printers like the Objet 500 is that it is expensive, its materials are expensive and it takes a long time [to print]. So an entire skull with a skull-based tumor and blood vessels and everything may take a day and a half to print. But we think the benefits outweigh some of those downsides, obviously.

How many of Mayo’s departments are using the technology?

Every surgical department. Once people get it in their hands, they realize how useful it is because your brain is meant to interact in the physical world. Even working with holograms, it can be interesting, but it’s still not the same. A vast majority of your brainpower goes to touch. And that’s why I’d say at Mayo it’s commonplace, the use of 3D printed models is commonplace compared to most other [clinics and hospitals] where it’s rare. We’ve worked really hard to develop a quality program because when it becomes more commonplace everywhere the question becomes: how do you incorporate this into a clinical workflow? How can this be incorporated and scaled up? For example, with radiology, we do over 1 million exams a year. We couldn’t print 1 percent of that. The technology is not fast enough, it’s too expensive. But for those more complex cases we are going to need a model, which at Mayo is about 300 models a year going on 400.

When do you think more hospitals will embrace the technology?

Until a reimbursement code [for health care providers] is created and the printers get faster, the materials get cheaper, the software gets easier to use, until all of those things happen, there won’t be broad adoption of what we’re doing. Right now there are only a few labs that do this around the country. There’s us, there’s Walter Reed, and Beth Israel. There are other places doing 3D printing in isolation—one here, one there—but when you talk about who’s doing it on an everyday basis as part of clinical care, there’s very few people that are doing that.

Is it fair to say that 3D-printed models could become standard procedure for operations nationwide in the next decade or so?

I would hope it’s not a decade. I would like to see it in under five years. Even now, while the costs behind starting up a 3D printing lab may be a lot, if you look at the total costs of reducing two hours out of every pancoast tumor surgery in the operating room, that ends up saving money. I mean, if you look at the 3D printing model just as its own cost structure, then it costs a lot of money to make that pancoast model, probably over $1,000. But when you look at avoiding a major incision, not needing another surgeon in the room, decreasing the amount of time under anesthesia, decreasing the amount of time in the operating room, decreasing the length of stay by x-number of days—then that cost is piddly compared to the cost of a surgery without it. So I think Mayo in its wisdom is looking at the global picture of what it brings to the table, not only in how it improves care, but how it financially makes sense.