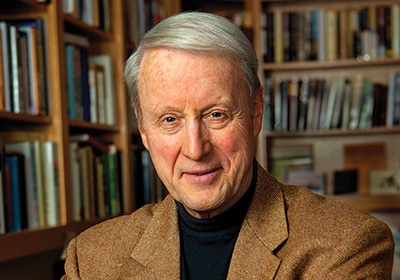 Author probes why the middle class is losing ground.
December 05, 2015

Hedrick Smith, who served as a New York Times editor and reporter for 26 years, recently visited St. John’s University in Collegeville, Minn., to discuss his book Who Stole the American Dream? Smith has been engaging U.S. citizens about changes in government policies and business practices that have weakened the middle class. Liz Fedor, an editor at Twin Cities Business, interviewed Smith and moderated a discussion with him in October on the St. John’s campus. The event was sponsored by the McCarthy Center for Public Policy and Civic Engagement. What follows are edited excerpts.

In your book, you state, “The gravest challenge and the most corrosive fault line in our society is the gross inequality of income and wealth in America.” Why is this such a serious problem?

HS: Our economy is based on the notion of equal opportunity and that people can rise up and do whatever their talents and their hard work enables them to do. When you have built-in inequalities of income that we now have in this country, that opportunity is not working. The market is not working when you have a situation where for the average American family today, median family income is lower than it was in 1999.

We have so much concentration of wealth in the top 1 percent, and the middle class is not doing well. That’s an unhealthy economy. When we have high inequality of income, we actually have slow growth. If the middle class makes more money, it spends it. It is consumption that drives growth.

HS: Big companies used to pay better salaries and better benefits, and they used to think about all of the stakeholders. They moved over time to focus much more on the shareholders, mainly concentrated in Wall Street.

Do you think the pendulum will swing back and large businesses will place greater importance on serving multiple stakeholders?

HS: This issue is being vigorously debated within business leadership, at the Brookings Institution, within the Business Roundtable. Any number of leading business organizations now have arguments between CEOs and others about how they should run their companies.

Some business people cite technological changes and globalization and say, “This is why American companies have evolved the way they have.”

HS: One of the former vice presidents of the Federal Reserve Board said that 30 percent of the jobs in America are vulnerable to being exported overseas. Jobs that are being shipped overseas in America today include many knowledge economy jobs, jobs that are filled by people with college degrees.

Why is that going on? Is it a matter of technology? Is it a matter of education? The standard story from American business is that this is a matter of globalization, these are market forces, and that you can’t do anything about it. And this is modern technology. And so get over it, American middle class, this is the way it’s going to be.

You’ve raised a counterargument by holding up Germany as an example of a developed country that retains high-wage jobs.

HS: Germany has taken a different fork in the road. It has not tried to hold wages down and shift jobs overseas. What’s happened in Germany is they have maintained a large manufacturing workforce. The American manufacturing workforce has dropped from about 20 percent of the population in 1999 to about 8 or 9 percent today.

In Germany, the manufacturing workforce is 21 percent. That’s important, because companies like Mercedes and BMW, which make some of the best cars in the world, and like Siemens, which makes electronics and heavy electrical equipment, they have raised the pay of their workforces.

They have spent enormous amounts of money retraining their workers for the new technologies so that jobs don’t wind up going overseas. They keep the high-skilled jobs in Germany.

How is Germany faring in the world economy?

HS: The United States had a $6 trillion trade deficit with the world during the decade of the 2000s. America bought $6 trillion more stuff from the rest of the world than we sold, and most of it from China.

At the same time, Germany had a $2 trillion trade surplus. The Germans are competing in the same global market as we are. What we better do is understand what it is about Germany that enables them to do this.