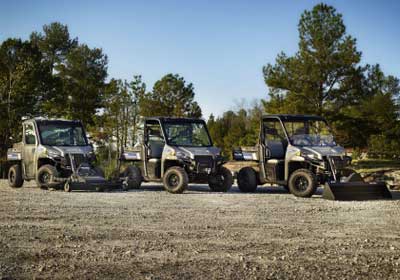 In partnership with Bobcat, the company just launched a new line of commercial utility vehicles, a move that signals its growing interest in the commercial market.
March 17, 2013

Polaris Industries, Inc., said late Wednesday that it recently launched its first line of “purpose-built” commercial vehicles, which it developed in partnership with Bobcat—a move that signals its growing interest in the commercial market.

Medina-based Polaris is primarily known for the recreational vehicles that it makes—which include all-terrain and side-by-side vehicles, snowmobiles, and motorcycles. And its product portfolio includes several vehicles that have commercial uses.

“Launching Brutus is a milestone moment for Polaris and an integral step in our continued commitment to grow and strengthen the company through adjacencies,” Polaris President and Chief Operating Officer Bennett Morgan said in a statement. “At its core, Polaris is an innovation company, and Brutus showcases that spirit of innovation for a market that we’re excited to service in the years to come.”

The three Brutus products—Brutus, Brutus HD, and Brutus HDPTO—can all tow a 2,000-pound load, have a pallet-sized rear cargo box, and have fully enclosed cabs that can be used in any weather and that have heat, defrost, and air conditioning.

Vehicles in the Brutus line can also tackle a wide variety of jobs thanks to their ability to operate several front-end attachments, including a snow blade, a pallet fork, a materials bucket, an angle broom, a finishing mower, and a snow blower.

“The Polaris Brutus line captures needed job capabilities in one machine built to deliver in any climate,” Dave Longren, vice president of off-road vehicles and off-road vehicle engineering, said in a statement. “There is a significant opportunity in this commercial segment. . .”

Knutson said that Polaris and West Fargo, North Dakota-based Bobcat launched a partnership in 2009, and the co-developed Brutus line is the latest outcome of that alliance. While Bobcat brought technical knowledge related to hydraulics and attachments, Polaris had expertise related to the new vehicles’ chassis and an existing partnership with the company that made the Brutus engine.

All three of the Brutus models are produced at Polaris’ Spirit Lake, Iowa facility.

Polaris’ entry into the commercial market has been rather recent. In 2011, it purchased two companies that make electric vehicles used by some commercial businesses. Global Electric Motorcars makes low-speed electric vehicles that are used by government agencies, resorts, universities, medical and corporate campuses, sports teams, and other entities, as well as individual customers, to transport small groups wanting to get from point A to point B—for example, across a college campus or from a home to a tennis court within a retirement community. And French company Goupil Industrie SA, which Polaris also acquired, makes larger electric vehicles that commercial businesses use to transport things like trash and mail.

Polaris’ other commercial-oriented vehicles are the Ranger HD, a side-by-side vehicle used on various job sites, and its Big Boss, a six-wheel all-terrain vehicle that can haul and dump up to 800 pounds.

Several local money managers recently shared their top Minnesota stock picks with Twin Cities Business, and Polaris was one of them. To read why the company is worth watching this year, click here.