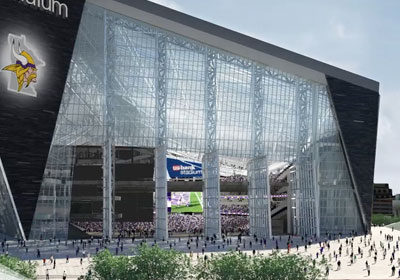 The deal allows Polaris to showcase its products on game days.
November 20, 2015

Polaris Industries Inc. said today that it had forged a partnership with the Minnesota Vikings and would be a founding partner of U.S. Bank Stadium.

Terms of the deal were not disclosed, but the Star Tribune reports that the partnership is a multi-million dollar contract over 10 years. Polaris CEO Scott Wine told them that the cost is “not material” to the company’s $500 million in yearly profits.

The Medina-based company will be able to feature its recreational vehicles throughout the stadium and provide “unique game day features” such as chauffeur services from tailgating lots.

“On Sundays during the football season, if our customers aren’t out riding, they’re likely cheering on the Vikings,” Polaris CEO Scott Wine said in a statement.
“Vikings fans are our current and future customers – and we share a passion for sports and the outdoors.”

So far, there are four other founding partners. They are beverage producer MillerCoors, grocer Hy-Vee, agribusiness Land O’Lakes and telecommunications provider CenturyLink.