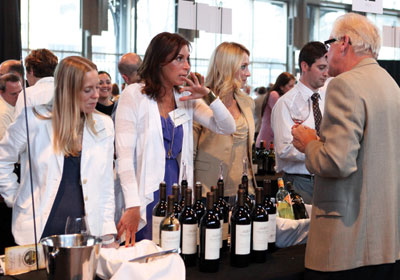 The best opportunities for networking this month.
By Anna Befort
May 11, 2012

The Pacer Center’s benefit is a rock star in the local gala scene, previously featuring national acts such as Sheryl Crow and Frankie Valli and regularly filling the Convention Center with 2,000-plus people, including countless business and philanthropic leaders. Its 30th annual event will be a funk-filled evening with Earth, Wind & Fire headlining. If mingling with a crowd of 2,700 feels daunting, spring for a patron-level ticket to get access to the post-show patron party, or buy a separate ticket for the pre-show dinner, which is attended by about 280 sponsors, board members, and other Pacer supporters. 5 p.m., $65–$550, Minneapolis Convention Center, 952-838-9000, pacer.org/benefit

Opening Night of The Amen Corner at the Guthrie

Most Guthrie opening nights don’t involve live gospel music, but then The Amen Corner isn’t most Guthrie productions. In fact, it isn’t a Guthrie production at all; St. Paul’s Penumbra Theatre is bringing the James Baldwin play to the Guthrie’s Wurtele Thrust stage. The evening will attract both Guthrie and Penumbra patrons. “It’s one of those social events that’s good to network and be seen at,” says Archie Givens, president and CEO of Legacy Management & Development Corporation. Top Penumbra talent is involved, with Lou Bellamy directing, Sanford Moore doing musical direction, and Greta Oglesby—who received critical acclaim for her 2009 role in Caroline, or Change—starring in this tale of religion, family, and salvation. 7:30 p.m., $40–$68, Guthrie Theater, Minneapolis, 612-377-2224, guthrietheater.org

In its 17 years, WineFest has raised almost $8.5 million for children’s health care at the University of Minnesota. “The [Amplatz] Children’s Hospital event is a big-time deal,” says Leo Collins, a vice president with RBC Wealth Management. “They get great support from the business community.” With two nights and four events, you can mix and match as you please. Friday night’s wine symposium and wine-tasting dinner attract a bigger crowd—about 900 people sampling 400-plus wines. Saturday trends a little more formal: The 700-person fine-wine dinner attracts a range of business and philanthropic leaders, and there’s a “special reserve reception” for community leaders, sponsors, VIPs, and others willing to shell out $500. May 11: 5:30 p.m.; May 12: 5:30 p.m. $85–$500, The Depot Minneapolis, 612-626-8429, thewinefest.org

Join Best Buy CEO Brian Dunn and other local businesspeople for this annual awards luncheon celebrating ethical Minnesota companies. Expect to see leaders from each of the nine companies being honored, as well as community supporters, sponsors, and folks from the Twin Cities chapter of the Society of Financial Service Professionals and the Center for Ethical Business Cultures at the University of St. Thomas, which started the MBEA in 1999. You’ll hear how other companies are weaving ethics into their business practices, and perhaps walk away with a few ideas—and new contacts—of your own. 11:30 a.m., $45, Nicollet Island Pavilion, Minneapolis, 651-815-0668, mnethicsaward.org