W3i takes its free download model to the mobile gaming world.
May 11, 2011 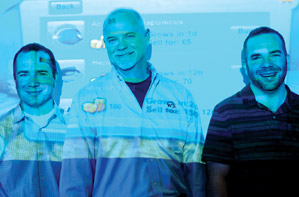 In 1998, brothers and St. Cloud State students Rob and Ryan Weber founded Freeze.com, which offered free clip art, screensavers, desktop wallpaper, and other downloads. How’d they make money off of free stuff? Before customers could install these items, they had to click through a pitch to download software that generates revenue by displaying ads on users’ computers. Every time someone clicked “yes,” the Webers got a cut from the advertising software developer. By 2004, Freeze.com’s revenues were more than $20 million.


That success with desktop software is helping fund the firm’s ambitious dive into mobile gaming. In December, the company—which rebranded as W3i in 2007—capitalized an investment fund called Recharge Studios. The fund partners with independent developers and publishers to develop and market their games.

In the first quarter of 2011, Recharge Studios provided more than $1 million in funding. W3i plans to be involved in the release of 22 games this year, all of them playable for free on iPhones, iPods, and iPads.

So how does W3i make money with free games? Through the use of a virtual currency.

W3i’s most popular screensaver features an animated, 3-D dolphin swimming back and forth across a coral seascape. That dolphin also is the star of Recharge Studios’ first game, an aquarium simulator called Dolphin Play. The word “game” might be confusing, since it suggests competition. That’s why the term “sim” (for simulator) is often used as an alternative for digital distractions like Dolphin Play.

Players who feed the fish and clean their tanks over time earn “Dolphin Bucks,” which can be used to buy more fish or decorations, like a sunken pirate ship. Less patient players can get more Dolphin Bucks by purchasing them with a credit card, or by visiting an “offer wall,” where they can choose to download a free game by one of W3i’s clients in exchange for more Dolphin Bucks.

So-called virtual goods games like Dolphin Play, in which players spend real money buying digital fish or weapons or apparel, are a booming niche. (The Facebook game Farmville is another example.) Research firm Inside Network forecasts that Americans will spend more than $2 billion on them this year. These games also are controversial. Minnesota Senator Amy Klobuchar and other federal legislators have asked the Federal Trade Commission to look into whether some games have deceived kids into spending hundreds of dollars. (Dolphin Play hasn’t been implicated.)

To make significant money, these games need a lot of people to be playing them, which is why publishers fight hard to get on Apple’s Top 50 most-popular-games list. W3i got the word out about Dolphin Play through various game Web sites and blogs. The game first showed up in the App Store on December 18; it stayed on the Top 50 from December 21 through 26, climbing as high as number 16.

Mobile games are yet another direction for W3i. The year the company rebranded, it hired former Fingerhut executive Andy Johnson as CEO. W3i then expanded the Freeze.com model by offering its installation program to other desktop software publishers. (W3i splits the advertising software revenue with these partner publishers.) “We’re still doing screensavers . . . but now it’s only 2 percent of our business, not 100 percent of our business,” Johnson says. W3i currently employs 70.

“We wouldn’t be developing this game if we weren’t working together with W3i,” McMahon says. “We don’t have the means to promote it and get successfully in front of enough users ourselves. I think that they certainly have the potential to make some really interesting and cool changes to the App Store dynamics.”