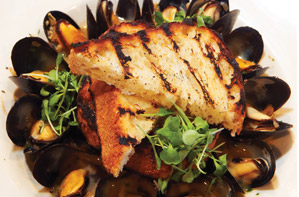 Out of the Pint Glass and Into the Pot

At the Happy Gnome, beer belongs in your dinner and alongside it.
By Tricia Cornell
February 13, 2011

Chef Scott Brink may work in the kitchen, but at the Happy Gnome, he is literally surrounded by beer. The 70 taps and even bigger selection of bottled beers at the bar are an unmistakable source of inspiration in his cooking.

“It’s fun to go out there and just play around with them,” Brink says. “Experimenting is the big thing when it comes to beer.”

Brink has beer-steamed mussels (pictured above) on the menu now. On my visit, they bathed in a rich broth of nut brown ale, sturdy with butter and herbs, though the type of beer in the dish changes. Sopping up the broth with grilled bread is like getting the best parts of beer-cheese soup without all that cheese getting in the way.

Not every beer likes to be cooked. “A lot of the hoppy beers are harder to work with because when you reduce them they get too bitter,” Brink warns. But malty beers and bold, sweet oatmeal stouts work well. Beer adds body, depth, and a hint of bitterness that’s hard to find in other ingredients. Brink’s beer-infused dishes hold their own on a February night.