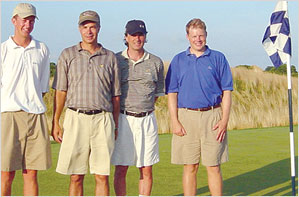 For Larry Berle, it's not how well you play or even where, it's who helps get you onto the course.
December 11, 2007

Here’s what Larry Berle says he learned from golfing the top 100 courses in the country: what it takes to be a great guest, how to improve his memory, how to see with a photographer’s eye, that golf is a metaphor for life, that bad shots are opportunities, how to read yardage, how to network, and that people are happy to help if you ask them.

Note that none of that—except for the yardage—has anything to do with improving his game.

Berle, the longtime owner and chief executive of Minneapolis concert promotion firm SRO Productions (he sold it three years ago), set off on a quest in 1992 to play all of Golf Digest’s Top 100 courses. As is fitting for a quest, he completed his journey 10 years later with a changed perspective on life.

He was a novice golfer, just introduced to the sport by his wife, Annie, who took him to Pebble Beach in California for his birthday that year. “On the 18th hole, the caddy looked at me and he said, ‘You know, you’re standing on the tee box of the greatest finishing hole in all of golf,’” Berle remembers. “I could feel the presence of Jack Nicklaus and Arnold Palmer and all the greats that had walked up that fairway.”

On the way home, he told Annie he’d like to recreate that feeling. Maybe playing more of the top 100 courses would do it. “It did, in a few cases,” he says, “but for the most part, the results were quite different than that.” His focus shifted from great golf experiences to great people experiences.

“It transitioned to really understanding how phenomenally generous and giving people are in the world,” Berle says. He needed help getting into what are some very private clubs—“some of them are just shy of putting up signs that say ‘Go away,’” he jokes. Friends of friends or someone’s former business partner would end up arranging access to an exclusive course—and often much more: a limo to pick him up at the airport, or hosting him in their homes.

At a minimum, Berle says, “you are asking someone to take four hours out of their day with a complete stranger and bring them into their private little sanctuary.” It got easier to ask for that hospitality when he realized how much satisfaction people got from taking him closer to his goal and following his progress. Early newsletters to a few acquaintances became broadcast e-mails to a list of nearly 200 people. “I’d write up a bit and at the end, I’d say, ‘These are the next five [courses] I’m going after. Do you know of anyone?’”

Berle stays in touch with about 25 of the more than 100 new people he met, and found four or five good friends who he continues to travel and golf with. Meanwhile, he’s putting his new networking skills to use promoting his book, out earlier this year, A Golfer’s Dream. Berle was headed to Orlando on October 30 to tape an interview for cable’s Golf Central that’s expected to air in November.


Berle’s self-published account of his 10-year adventure, A Golfer’s Dream, is available ($14.95) at golfersdreambook.com.