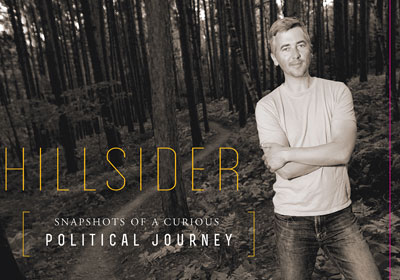 On Top Of The Hill With Don Ness

With the end of his term in sight, Duluth Mayor Don Ness looks back on a city that’s become more entrepreneurial.
October 01, 2015

This past summer, an ambitious young Duluth entrepreneur garnered national news coverage. Milo Amundsen and his company, Ad Cycle, offered local clients space on his bicycle and bike helmet for advertising messages that would be seen wherever the 12-year-old CEO rode during the day.

Minnesota TV reports and an online story in USA Today showed Amundsen laying out his business model, with the help of his business manager and sister, Abbie, and cycling up Duluth’s often daunting hills with cheerful determination.

It’s the kind of entrepreneurial spirit that has been abundantly in evidence in Duluth during the nearly eight years that Don Ness, 41, has been his native city’s mayor. One of Amundsen’s clients is mayoral candidate Emily Larson, one of eight candidates running to take Ness’ place in this November’s election.

Talking in his spacious office, the Duluth mayor, dressed in business-casual, is looking back on a pivotal time in the city’s history. “It’s been remarkable to see the transformation of this community,” Ness says. The basis of that, he asserts, has had “very little to do with City Hall or political leadership. It’s the private sector stepping forward and taking steps that require courage and confidence and optimism that I don’t think was as present before.” The $70 million building that now partially blocks his view of the harbor will be the new headquarters for women’s clothing chain Maurices. It’s the highest-profile of the many new construction projects in the city. A project like the Maurices building, Ness says, “happens in downtown Duluth only if they feel good about the future.”

Milo Amundsen comes from an entrepreneurial family. His parents, Lucie and Jason Amundsen, moved to Duluth from the Twin Cities. In 2012, they founded Locally Laid Egg Co., whose pasture-raised eggs now are sold throughout Minnesota. They’ve also established relationships with six partner farms in the Midwest that meet their standards. Lucie Amundsen has written a book about her family’s start-up, Locally Laid: How We Built a Plucky, Industry-Changing Egg Farm—From Scratch, to be published next March by Penguin Random House.

In October, Ness is publishing a book of his own: Hillsider: Snapshots of a Curious Political Journey. Comprising more than 150 “snapshot” essays—including some written by his wife, Laura—and lots of photographs, the book discusses what he learned during 16 years in public office as mayor and city councilor, along with stories about Duluth’s difficult times in the 1970s and ’80s, and its ongoing revitalization.

As the newly elected mayor, he worked with the City Council to confront some huge financial challenges that could have plunged Duluth into bankruptcy. For instance, he developed a solution that slowed the rapidly escalating cost of retired city employees’ health care benefits.

And even with the recent recession and the enormous 2012 flood that overtaxed the city’s infrastructure, Duluth continues to emerge from its Rust Belt past. These days, the economic drivers in Duluth include aerospace, engineering, education and health care. It’s also a regional retail center, with numerous chains and malls located in Duluth Heights, “up the hill” from downtown. In the first half of this year, the city’s tourism revenue increased by 11.6 percent, which put it on course for a record year.

But it’s the homegrown entrepreneurs that perhaps best reflect the “new” Duluth. The city has savored the rise of several breweries, most notably Bent Paddle, which has blown past its growth projections and now sells its beer in the Twin Cities. Vikre makes distinctively flavored gins, vodkas and aquavits. Locally grown restaurants such as Northern Waters Smokehaus and the Duluth Grill are thriving.

As Ness freely acknowledges, many of the factors that have turned Duluth around were in place before he became mayor. Canal Park arose from the junkyards and warehouses that ruled the northern end of Minnesota Point in the 1980s. Cirrus Aircraft, one of the hub companies of the city’s growing aerospace cluster, made Duluth its home in 1994.

But over the past eight years, Ness has become the symbol of an energetic, younger spirit in the city. Between 2000 and 2010, the number of people between 20 and 34 years old rose to 15 percent, to 23,567. And that spirit has been needed in a city that he describes as “on the fringes of the American economy.”

That’s why energetic, visionary businesspeople are so essential to Duluth’s ongoing revival. Case in point: Greg Benson, one of the principals of Good Sheet, a group of companies that includes Loll Designs, a manufacturer of casual furniture from recycled plastic, and Epicurean, which makes cutting boards and other kitchenware from wood fiber and other recycled materials. Started in 2002, Loll and Epicurean now sell their Duluth-made products worldwide. Benson says Epicurean saw 15 percent growth last year, and Loll Designs grew 30 percent.

Though Duluth isn’t the most central location for a growing midsize business, Benson, his partners and their 100 employees enjoy the outdoor lifestyle and easy commutes. “You can have success around the country and globally in Duluth,” he says. “[Being in] Duluth doesn’t hinder that.”

“Now we’re getting to a place where people see our industrial heritage as something that makes Duluth feel authentic,” Ness says. “We’ve never turned our back on our industrial heritage. That’s something that’s core to the feel of our city.” The older downtown buildings, he adds, “are a real strength.” What Ness believes is one of the appeals of Duluth to visitors and those who move here is a city with a unique economic history, a city “that has been battle-tested.”

Ness also regularly makes the scene at the city’s many music venues, such as the Red Herring, a downtown music club opened in 2014 by Duluth native Bob Monahan. In 2012, Monahan launched Chaperone Records to record local musicians—so far, the little label has released 20 albums. Why are there so many bands in this small city, with national acts such as Low and Trampled by Turtles and ever-expanding music festivals like Homegrown? “That’s a question that I think dumbfounds a lot of people here,” Monahan says. Part of it, he surmises, is that “Duluth is an accommodating place for people who want to live cheaply and make art.”

Duluth, in short, is a fun place. Still, Ness also is quick to say that city streets and century-old infrastructure continue to need millions of dollars in repairs. On a macroeconomic level, he notes regional troubles with the Iron Range’s taconite mining industry. Duluth is a “regional center for a broad and expansive geographical area,” Ness says, and the Range “continues to be a part of Duluth’s economy.” True, “there is probably less of a direct correlation than it had 30 years ago.” But clearly that connection remains, and it’s an important part of Duluth’s economy, he says, particularly for its banking, legal and engineering sectors.

Though his term is winding down, Ness has plenty on his desk. New building and economic development proposals are “coming to us on a regular basis,” he says. The city also is involved with the clean-up of part of the old U.S. Steel mill land in southwestern Duluth, as well as the transformation of the breathtakingly gorgeous but heavily polluted St. Louis River estuary into an outdoor recreation and environmental education zone.

“It feels like a good point in my life to transition to something else,” Ness says. As of late August, he didn’t know “exactly what that is.” Still, “I’m excited to move out of public life and towards something that will provide new and different challenges.” He hopes that his next big thing will allow him to stay in his hometown. TCB